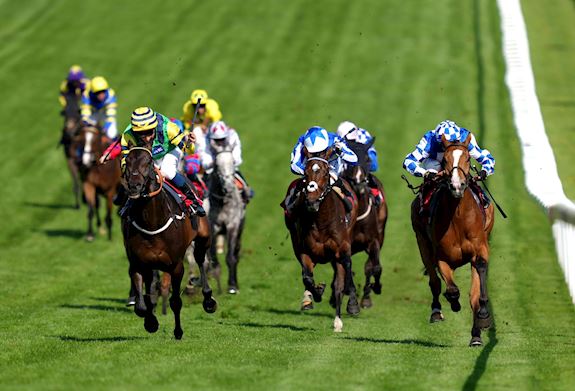 ROUND-UP OF THE FINAL TWO RACES ON CAZOO DERBY DAY

The penultimate contest on Cazoo Derby Day was the Northern Dancer Handicap, which saw 12-1 hope Midnights Legacy relish the full mile and a half Derby distance to score by two and a quarter lengths.

Winning jockey William Buick said: “The further he went, the better he was going. So I angled him out in the straight and got a clean run at them. Alan (King, trainer) told me he can hit a flat spot, so I wanted to get a bit of room and get him through it. To be honest he picked up really well and once he hit top gear I never thought it was in doubt.

“The second horse (Soto Sizzler) obviously got the run of the rail, which is quite advantageous when you get that here. I still felt in control of my horse and I think there is more to come from him.

Successful trainer Alan King said: “He’s back to form and we lost him a little bit last season, we gave him a small wind op and it has taken time to get him back. He was very good at Salisbury the other day and he’s built on that here.

“He looked to travel very well today and you know he gets the trip, but it’s probably his limit – I’ve just spoken to Will (Buick) and we’ll probably stick to a mile and a half. I think Ascot’s going to come quick for him and we’ve probably got a few others for the mile and a half handicap, so we’ll see what the handicapper does. We’ll have a look and see, but Ascot will probably come a bit too soon.”

David Menuisier, trainer of the 3-1 runner-up Soto Sizzler, said: "He reared as the stalls opened and that's why he missed the break. I think that probably cost him the race as he had too much to do from there, but despite that he ran a stormer.

“I don't know if Royal Ascot might come too soon, but there are bags of races for a horse like him. We know he's right back to his best, and if he found a bit of improvement we know we'll have fun wherever we go."

Oisin Murphy, rider of Soto Sizzler, added: "He's in super shape and he's moving great, but I just wouldn't go any further than a mile and a half with him. I think that's his absolute limit."

Andrew Balding, trainer of third home Group One Power (the 11-8 favourite), said: “It was a good effort and he’s gone up a bit in the weights, but he ran with credit and we’ll probably have a look at options coming back in trip.”

Cazoo Derby Day concluded with the six furlong Cazoo Handicap, which saw trainer Ian Williams and jockey David Egan record a 103-1 double on the day as 3/1 favourite Ejtilaab took the honours by a neck.

Williams, who saddled 25-1 chance Mokaatil to victory in the World Pool “Dash” Handicap earlier in the afternoon success, said: “It was a smart enough display. A friend of a friend said run this horse over six as he will really enjoy it.

“When we jocked up Richard (Kingscote) at Chester last time I said when you go out think about whether we should run this horse over six or not. He came back in and ran a great race finishing second over the best part of a mile around Chester and he said he I think he has got the pace for six.

“Paul Wildes, his owner, texted me and said what about this race at Epsom and I said “yeah, why not?” When it rained here on Friday I thought it was going to give us a real chance in this race and I think that has probably helped.

“They went very hard up front and I was confident from about two out that he would pick them up as you knew he would stay. It was the first time he has been on his head early in a race and not wasting that effort. I don’t think we have been running him over the wrong trip, but maybe we have. It is a tough race to win this race. It is a bit strange this ground today and I don’t know how the form will hold up but you can do no more than win.

“There is the Stewards’ Cup but I was thinking more of an Ayr Gold Cup for him as he will get his ground and it will be a test of stamina with a horse that can hold a position early on. I’m used to winning three mile chases around Newton Abbot on a Saturday and I’ve now won two races on Derby Day, which is something else and quite exceptional.”

David O’Meara, trainer of second Muscika (25-1) said: “That was a great run and he’s a grand horse. I thought he’d run well here and he’s very likeable. He loves York, so there may be something back there for him next.”

Joe Tuite, trainer of third Kimifive (6-1) said: "He's in the Wokingham and that's the plan. He ran very well, as he always does, but he wants to hear his feet rattle and doesn't handle this ground. There's a big day in him some time."