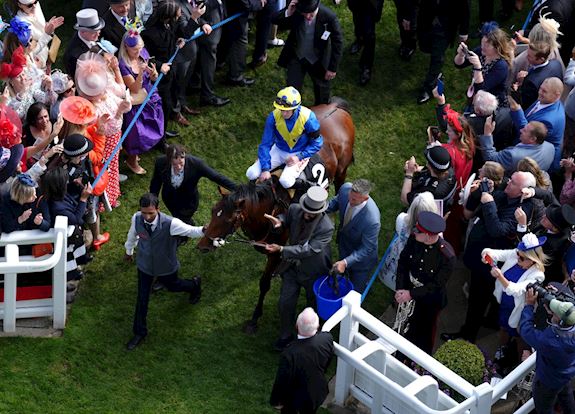 Sir Michael Stoute, winning trainer, said following the success of Desert Crown in the 2022 Cazoo Derby: “He was very cool (Richard Kingscote) and he rode a beautiful race. It was wrong (jokes about the three cheers) it should have been for the horse. I appreciate it though. It has been a great afternoon. I am to be proud of that (oldest trainer to win the Derby at age 76), I’m proud of the horse.

“We were very hopeful after York that he might win the Derby. His performance delighted me as he had it won a long way out. He has got such a good mind to go with his ability.

“From an early stage he was having little niggles that is why he didn’t run until the backend last year. There was nothing serious he was maturing and developing and that was causing a few little problems with niggles.

“That was a foot problem (why he wasn’t out until the Dante). I was very happy when he got to the top of the hill where he was positioned. He travelled and he is a good athlete, he floated down the hill.

“Shergar was very special and he hasn’t quite reached that stage but he has potential. It is a wonderful thrill (to be back here) for the whole yard.

“It is a delight to train good horses and fortunately we have come across another good one.

“I didn’t know (if those days of training a Derby winner would return). When you realise and as time goes on your chances lessen. It has been a lot of years (since our last Derby winner) which I didn’t think there would be.

“That it is very nice (winning the Derby on a jubilee year) but I’m sad I didn’t win it for her (The Queen) as I think we were unlucky with Carlton House - that would have been the biggest thrill.

“It is always nice to see the Queen racing here and Ascot and anywhere.

“The more success Newmarket achieves the better for Newmarket. I’ve been in Newmarket since 1968 so it has been home for a long time.

“I think there were a lot of well-wishers (in Newmarket) as they had been impressed with him in the Dante. They were all thinking of him.

“I think all of a sudden those that knew well though it was a professional piece of work (with Solid Stone) as he is not scintillating but he quickened impressively.

“I think you have to just go home and see how they take it and we will just try and get it right and see how his recovery is (as regards next target).

“These good horses have good acceleration and he won the Dante over a mile and a quarter so I think 10 or 12 will be no problem.”

Richard Kingscote, riding his first Cazoo Derby winner today on Desert Crown, said: “He was very good today, very smooth, and for a horse who has only run twice, he was very professional. He took all the preliminaries beautifully and I was really pleased with him. Every time I’ve sat on him he’s been very calm, and today was no exception. I couldn’t fault him. He went to the start and then fireworks went off, and he was a lovely ride.

“He jumped really well - he does have a hood in the stalls, and he jumped well. Sir Michael was keen for me to try and take a reasonable pitch. I was hung out a little wide once we crossed over, took a little time. Once we went to the seven I was able to slide one off the fence. From there he was very comfortable, came down the hill really well balanced, changed leads over the road and off he went to top gear. I probably got there a little soon but it meant I was able to pull him up. The others just weren’t able to take him along, and it just shows that he’s got a good deal about him. Turning in he was still going so well, I probably just put him into top gear a little soon. Once I got upsides Ryan [Moore, on Stone Age] I was able to take a little breath at the two-pole and let him kick on, and he didn’t everything beautifully.

“I think he was a bit more push-button today [than in the Dante]; he was a lot more alert through the race. Everything I asked of him I got pretty much straight away. At York it took me a little time to wind him up and everything was much more solid today.

“Before York I didn’t know what to expect. Once I rode him at York I thought, he’s good enough, and I didn’t really want to believe it just in case… He’s clearly got a little class.

“He does have gears; he got to the line very well. Honestly, I couldn’t pigeonhole him [as to distance] - he’s very likeable and has got a lot of class. The rest is up to Sir Michael.”

Asked what it feels like to be in the illustrious band of jockeys who have won the Derby for Sir Michael Stoute, he replied: “I think it is quite surreal; as a jockey maybe you don’t see yourself amongst jockeys like that, and it's only through support of other people that we are able to do it. I think it took a lot of guts from Sir Michael and the owner to maybe stick with me in a Derby as it is, so I am very grateful to them for supporting me and letting me ride a very good horse. I am not a champion jockey, I’m not Ryan Moore. I’ve had a good career but I’ve not had a starlit career. I think it takes a lot of support for them not to look elsewhere.

“In the last two years, being supported by the likes of Sir Michael gives you confidence as a rider, and I think it’s done me good.

“Tom Dascombe [for whom Kingscote was stable jockey for many years] has been great to me throughout my career. He’s been a rock, he’s really had my back for a long time and he got the ball rolling. He gave me a huge amount of confidence as a young man. There are honestly so many people who have got me here - too many to thank, but my wife for putting up with me, my agent has looked after me for 15 years and done a great job. I’m grateful to everyone who has helped me along.

“I got goose bumps pulling up, when you realise [you’ve won the Derby], but at the two-pole it was all over.

“I think it’s nice that my kids were able to come. I was a bit nervous about them coming because it changes my routine, but my wife wanted to be here and I’m glad they all were.”

Speaking later at the subsequent press conference, Kingscote added: “Once I got to the top of the hill and get one of the fence (I was happy) as I thought for a minute I might have been trapped three deep which I didn’t want to be. He was travelling so nicely and he helped me along and he gave me a beautiful ride. The way he was going when we turned in and went over the road he changed leads and he skipped away I was quite taken away with him. He was very good.

“After York I’d been really quite confident but having not ridden a Derby winner before I didn’t want to get my hopes up. I tried not to think about being here but obviously you do. He has got a lovely character and clearly he is very good. I think this huge for any rider to win a Derby as lots of very good jockeys go through their career without being able to ride in the Derby or winning a Derby. It is only for the support of Sir Michael, his owners and his staff and all the other trainers that have supported me along the way I’ve been able (to be here).

“I think it was pretty close (to the daydream I had). I didn’t expect to be as close as I was but he jumped beautifully and they didn’t go as hard in the race as they looked like they would on paper but other than that he was beautifully smooth and gave me a lovely ride through.

“I think as jockeys we all feel to win a race like this you have to do something spectacular but at the end of the day, as Sir Anthony McCoy said the horse does most of the work and I was the one fortunate to be sat aboard him. You can put this down to him.

“It could be on the cards (getting another motorbike), maybe a Ducati we will see, I will speak with this man (Sir Michael).” 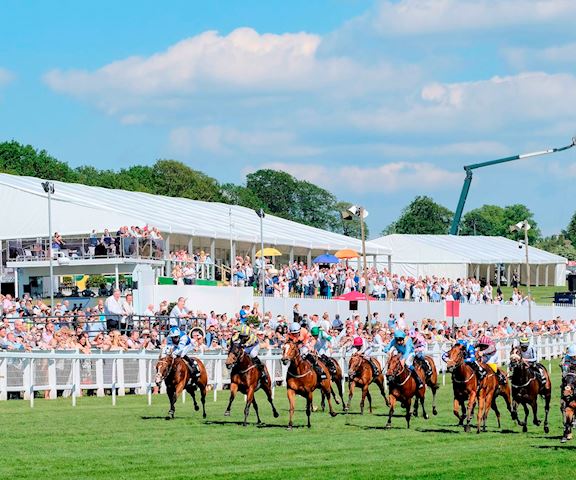