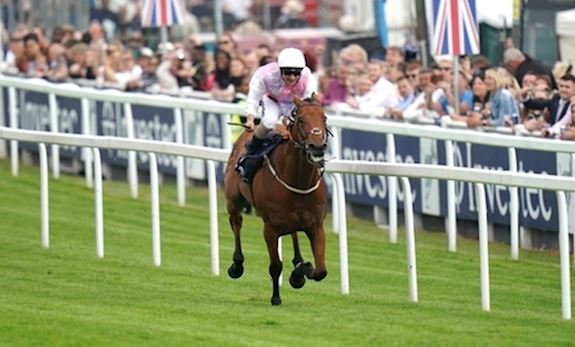 GOSSIPING FINDS THE ANSWERS
The seven-year-old Gossiping (10/1) made it three in a row when taking the Investec Mile Handicap by a very easy five lengths under a hands and heels ride jockey Andrea Atzeni.
The horse is trained by Horsham-based trainer Gary Moore, but it was his son, the Jump jockey Jamie Moore, who was in charge today - Mum and Dad currently away for a long weekend in New York to celebrate Jayne's 60th birthday.
"The horse had done well, Dad has done well with the horse as he lost his way for a bit," said Moore Jnr. "It is just a shame Shane Kelly wasn't on him today, he rides him all the time, but he had to go to Wolverhampton. Andrea did a good job today though.
"Gossiping's won on all sorts of ground, on the All-Weather and I was confident he'd get the mile today."
Moore was at loss to explain the rich vein of form the Dubawi gelding is enjoying at the moment.
"He got up to a mark of 96 last year, we sent him to the sales and no one wanted him. He does a lot of schooling at home, he jumps a lot of hurdles, leads the babies, maybe he enjoys doing that?"
With June's Royal Ascot meeting on the horizon, Moore Jnr was hedging his bets as to whether Moore Snr will send the horse to the Berkshire venue.
"He's never done well over a straight mile, we'll see, he always needs three or four weeks between races," explained Moore, who added about his Dad's trip away: "Dad doesn't usually venture far out of Sussex, but it is Mum's 60th so they wanted to do something special. Brother Josh is the one in charge at home, definitely not me!"
ATZENI HAS NO TIME FOR GOSSIP
The Gary Moore-trained Gossiping (10/1) ran out a ready winner of the £50,000 Investec Mile Handicap.
Ridden by Andrea Atzeni, the seven-year-old entire was always prominent in the mile contest and was kicked for home in the to score in taking fashion by five lengths.
Her Majesty The Queen's Seniority (11/2 favourite) was second, with a nose back to the Henry Candy-trained Greenside (6/1) in third.
Atzeni said: "He jumped really well and I managed to get a good position. He relaxed nicely and I took it up early enough but he was carrying very little weight.
"Once we hit the front, he kept picking up and I thought that it would take a decent horse to beat him.
"He pinged the lids and I was trying to get him in behind something but he relaxed in second and I didn't want to disappoint him too much. He won quite nicely.
Ashley Carr, part-owner of Gossiping, commented: "We had a bit on today, though not as much as the last couple of times! We are happy.
"Gossiping has been a dream horse to own. Every time we have had the money on him, he has produced the goods.
"There was a time when he was not so good, but he has come back and won at Chester for us, when he just got up.
"I think now he settles better, as he used to be a bit too keen in his races. Now he is settling, he never looked like getting beat today, did he?
"Andrea gave him a great ride, it's fantastic."
2.35pm Investec Mile Handicap
1 Gossiping (The Buckwell Partnership) Gary Moore 7-8-07 Andrea Atzeni 10/1
2 Seniority (Her Majesty The Queen) William Haggas 5-9-07 Ryan Moore 11/2 fav
3 Greenside (Clayton, Frost, Kebell & Turner) Henry Candy 8-9-00 Harry Bentley 6/1
Time: 1m 42.76s
Distances: 5, nse
Tote Win: £12.60 Places: £3.80, £2.20, £2.60 Exacta: £84.00
ROYAL RUNNER HEADS FOR ROYAL HUNT CUP
The Queen came close to an Investec Derby Festival victory when top-weight Seniority, owned by the Queen and trained by William Haggas, finished second in the Investec Mile Handicap under Ryan Moore.
Seniority, a five-year-old Dubawi gelding, was the 11/2 favourite but came home second to the 10/1 winner, Gossiping, by five lengths.
Haggas said: "I am very happy with him. He ran well and will go for the Royal Hunt Cup [June 19 at Royal Ascot] next."
Third was the Henry Candy-trained Greenside, who finished a nose further back at odds of 6/1 under Harry Bentley.
Candy said: "He handled it pretty well, but just got a little unbalanced over the road crossing and was hanging down the camber, as so many of them often do. But we are delighted - it was a very satisfactory run.
"What we do with him now is entirely dependent on finding some decent ground."