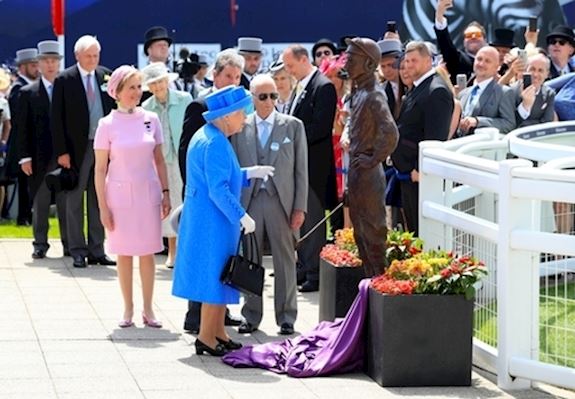 HER MAJESTY THE QUEEN UNVEILS LIFE-SIZE LESTER PIGGOTT BRONZE
Her Majesty The Queen arrived at Epsom Downs Racecourse for the Investec Derby Day 2019 at 1pm, met by racecourse chairwoman Julia Budd.
Dressed in a sky blue dress, matching hat and floral sky blue and yellow dress, The Queen met the legendary Lester Piggott before she unveiled a life-size bronze statue of the nine-time Derby-winning jockey.
It is the first of nine bronze statutes by portrait sculptor William Newton that will be installed at nine different racecourses around the country in honour of Piggott.
The idea was the brainchild of journalist Neil Morrice, who was joined by Osborne Studio Gallery's Geoffrey Hughes and Brough Scott, and came to fruition thanks to the generous support of David and Christopher St George.
The Queen was at Epsom for all nine of Piggott's Derby victories, and in 1957 he rode her own Carrozza to Oaks success.
The statue, located by the winners' enclosure, met with Piggott's approval.
"I think it has been a great idea, it's marvellous, I am honoured," said Piggott, whose family and friends were all on hand to watch the occasion. "I had seen the statue before today and it is very good. The Queen also seems in great form."
In today's Investec Derby, Piggott has gone for the Aidan O'Brien-trained pair of Broome and Sir Dragonet.
DERBY RUNNERS BIRTH DATES AND STAR SIGNS
Last year's Derby winner Masar was born on April 16 so is an Aries
Sectionals confirm Friday's Surrey Stakes winner Space Blues a potential Group-race winner
Data released by Coursetrack for Friday's racing confirm that Space Blues and Urban Icon registered particularly smart sectionals in the latter stages of the seven-furlong Listed Investec Surrey Stakes.
Space Blues, an impressive winner of a York handicap on his previous start, put himself firmly into the reckoning for Royal Ascot's Jersey Stakes later this month with a neck victory over the 2,000 Guineas eighth, the pair a length and a half clear of Marie's Diamond in a finish that saw the trio pull right away.
The winner completed the penultimate furlong in a time of just 10.32s (43.53 mph), following a fifth furlong of 10.51s. His seventh and last furlong was run in 11.03 seconds - the fastest final furlong of the day and fully 0.5 seconds quicker than that registered earlier by the two-year-old Oh Purple Reign, who appeared to fly the closing stages of the Woodcote Stakes in a strong-finishing second to Pinutabo.
Urban Icon was quicker than Space Blues in the fifth furlong (10.31s) but slower in both of the last two sections.
While five-year-old Defoe's time of 2m 33.94s for the Investec Coronation Cup dipped under the Racing Post's standard for the trip by 0.56s, the later Investec Oaks was run in an unexceptional 2m 36.09s (slow by 1.59s).
The sectionals reveal that the pace set by Communique through the first mile of the Coronation Cup was quicker than that set by Lavender's Blue in the Oaks at every stage and that Defoe's finishing effort - completing the final furlong in 11.87s, compared to runner-up Kew Gardens' 12.24s and Oaks winner Anapurna's 12.10s was particularly impressive, as was already apparent to the eye.