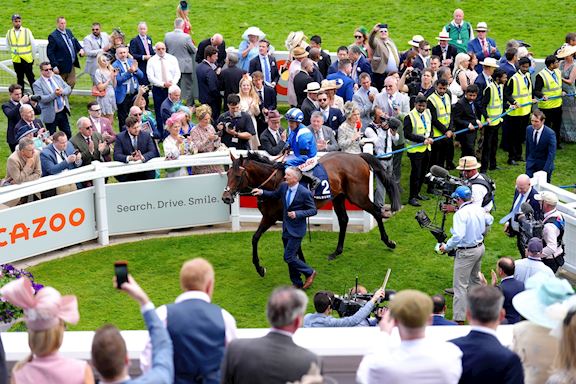 Trainer Owen Burrows was overjoyed to saddle his first Group One winner when Hukum (11-4) came home the commanding winner of the DahlBury Coronation Cup (1m 4f 6y) on Ladies Day at Epsom Downs.

Partnered by Jim Crowley, the five year old Sea The Stars horse finished four and a quarter lengths clear of 2021 winner Pyledriver (2-1 Favourite). It was a first Coronation Cup success for Crowley as well as owner Shadwell and provided some compensation for the narrow defeat of Al Aasy in this race 12 months ago.

Winning trainer Owen Burrows said: “He’s been a wonderful horse for me. He’s won numerous Group 3s, then the Group 2 in Dubai, and then he ran probably his best race there in the Sheema Classic, when he was drawn a bit wide, they didn’t go very quick, and he was only beaten about a length and a half.

“I always felt that there was one of these in him and I’m just thrilled he’s done it - for myself and for the team back home, as it’s been well-documented it’s been a tough 12 months, and also for the horse himself. I’m thrilled for everybody.

On feeling the effects of the rationalisation of the late Sheikh Hamdan’s racing interests, Burrows added: “We’ve felt it massively. We’ve got reduced numbers, but it’s still a big thrill for me that I’m still training for Shadwell and for Sheikh Hamdan’s family, and this hopefully will document that we can get the job done and entice a few more owners and horses in. Timing wise, this has been brilliant.”

On the prospect of further Group One success for Hukum, the trainer added: “Possibly. He was pretty impressive there. We’ll have to get our heads together and see where we go next. It’s important to have a little bit of juice in the ground, but he’s pretty versatile. He’ll be in the Grand Prix de Saint-Cloud at the beginning of July, he’s in a German Group 1 in August, he’s also in the Irish St Leger and then we possibly thought about Canada.

“I half intimated this might be his only sighting this year in England but we might have to rethink that now. The King George would be the obvious one, but we’d have to see what the ground is like and have a chat with the team. He wasn’t entered for the Arc originally, but he should get a bit of juice in the ground there and it’s definitely an option.

“We’ll celebrate. It’s been a tough time and we’ve had to reduce the team, but the guys I’ve got left have been brilliant. They’ve really got their heads down and worked hard. John, my head man, rides Hukum all the time and is leading up today, my assistant Rob is back at home holding the show on the road. They are a great team.”

Winning rider Jim Crowley said: “What a difference a year makes, I got a lot of stick last year and had a much more willing partner this year. He’s got high expectations with his brother so it’s nice to win a big Group One with him.

“Owen didn’t tie me down, which was good. I’ve been in the game long enough now to do my own thing and at the top of the hill they were going quite slow, so I decided to press forward and get him into a prominent position so we could be close enough turning in.

“Everybody was looking at each other at the top of the hill and to be honest this horse has won over a mile and five and finished fifth in a St Leger, so the last thing I wanted to do was to get caught flat footed coming down the hill. I was quite happy to go and sit where I did and the rest of it was easy. It could have gone wrong for sure!”

Angus Gold, Racing Manager for Shadwell, said: “We’re thrilled to win a Group One with this horse, he’s been so consistent and we’ve sort of set him aside for this.

“I thought Jim gave him a lovely ride, he always looked fantastic before to me and I thought he gave him a lovely ride when he made that move after a couple of furlongs and was in a perfect spot throughout. He was too good for them on the day. I think the horse deserved it, he’s been incredibly consistent and in the shadow of his little brother (Baeed), so it was nice to see him win at the top level.”

William Muir, who trains runner-up Pyledriver alongside Chris Grassick, said: “He has run a tremendous race. Have we ever made the running no but he lobbed away in front so you couldn’t make any qualms on that.

“Turning in I’m thinking Hukum is cantering and on his day Hukum was better than us today. We’ve beaten him the last two times and he has beaten us today, there is not a great deal between us.

“We’ve run great and Hukum was on his day so well done to Owen. I thought he was lame but Frankie (Dettori) said he was alright.

“They were going pretty steady but I wouldn’t make that (making the running) any excuse because Frankie has dictated his own fractions and we haven’t gone very fast.

“You wanted to be towards the fore and that’s where the first two were the whole way round. On the day the other horse had that bit more in the tank than we did.

“He looked fabulous. The King George has now gone through my mind if he goes home and is really well. He is in the Hardwicke but after that and a long break I think we will go to the King George.”

Aidan O’Brien, who saddled third-placed High Definition (7-1) said: “We’re very happy with him. We feel he’s going to get a mile and a half well, and we think there’s plenty more to come from him.”

Charlie Appleby, the trainer responsible for fourth-placed Manobo, said: “As William (Buick) said he rode like a two miler over a mile and a half there. Yes it was disappointing but we will go back in trip again.

“In Dubai, as William just said, he felt all day long he was a mile and a half horse with the pace and the way he travelled.

“He looked laboured at the top of the hill there to be honest with you. I just mentioned to William that maybe a quicker surface it would suit him as you know what those big horses are like they sink in that ground with a bit of juice in.

“We will be going back up in trip that is the answer. I was thinking he was a horse we might be able to go to Germany with in some of those mile and a half races there but on that evidence we might be still punching a bit high in those Group One races there.

“We will see how he comes out of it but there are no immediate plans.”

The DahlBury Coronation Cup is part of the QIPCO British Champions Series.