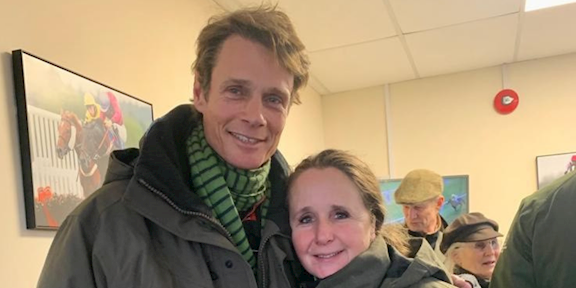 Trainer Charlie Longsdon insisted it is “exciting times” ahead for Snow Leopardess, who put his nerves to rest when continuing her preparations for an outing in the Randox Grand National at Aintree with an emphatic victory in the Virgin Bet Mares’ Chase at Exeter this afternoon.

Having secured Grade Three glory on debut over the Grand National fences in the Unibet Becher Handicap Chase in December, the 10 year old mare set up a return to Aintree with a clear cut success in the 3m Listed prize.

Racing right-handed for the first time since scoring at the same level in a bumper at Gowran Park in 2016, the Martaline mare proved a class above her rivals when demonstrating once again that stamina is very much her forte.

Following today’s success, Snow Leopardess was made a 20-1 chance for the Randox Grand National with both William Hill and Paddy Power.

Longsdon said: “These things are nerve-racking. The handicapper advised us to roll the dice one more time as we were borderline getting into the Grand National but you potentially risk all doing that.

“She has done it nicely today and ground it out. She only got going down the home straight and I don’t think she enjoyed being stuck behind loads of horses. She won a bumper going right-handed around Gowran Park but it is her first run since going that way.

“She showed a bit of class but she has had a hard race. We thought this was the perfect race for her. She was meant to win the race and she did win the race.

“I was more nervous about this race as she was expected to win. There is always an element of lottery over the Grand National fences.

“That might be it until Aintree now. We thought about giving her a run in a veterans’ qualifier at Newbury in three weeks’ time but that looks like it will come too soon. It was hard ground hard conditions today but she won.”

Although Snow Leopardess only scored by a nose in the Unibet Becher Chase, the Hull Farm Stables handler feels that the extended 4m 2f trip in the Randox Grand National will bring out the best in her.

He added: “They all say she got tired in the Becher Chase but that was her being lonely. She wants every inch of a marathon trip.

“She does want slower ground and that would be my only concern that if it did come up good ground at Aintree we would miss it.

“The Becher Chase was like this weather today, as was Haydock last season so it is funny that she has had the right weather when she has needed it.

“It is fantastic to have another Grand National contender and she will be one of the top-priced English horses in the race. It is great and exciting times.”

A total of 13 mares have won the Randox Grand National, although none since Nickel Coin back in 1951.

Sue Gardner praised the prize money put on by Exeter today after Empressive Lady (Evens Favourite) made it two wins from three starts this season when grounding out victory by three and three-quarter lengths in the Pertemps Network Handicap Hurdle Qualifier (2m 7f) under Sean Houlihan.

Gardner, who is based less than 10 miles from the track at Longdown, said: “She is tough. Sean rides here a lot and he comes in and rides her out at home.

“I’m delighted as she was second to Molly Ollys Wishes as a novice at Kempton on ground that was too quick. She hasn’t got to have a bog but it plays to her strengths.

“Realistically, the final would not be up her street unless it becomes wet at Cheltenham. The owner would like to get a bit of black type and that is in our mind.

“She is in at Hereford in the middle of the week and we will see how she comes out of this. If she did go there, that would be it for the season. We came here today really for the good prize money they put up.”

The victory was also a first in 2022 for triumphant jockey Sean Houlihan, whose last success came aboard the Jeremy mare at Kempton Park 48 days ago.

He added: “She loved the ground and loved the track. She stays all day and is very tough. She is a little bit of a tricky ride as she doesn’t like to be crowded but when you need her she is there for you. “

Victor Dartnall was another Devon-based handler among the winners after Run To Milan (100-30) went one better than on his previous visit to the course when prevailing by two and three quarter lengths in the Virgin Bet Veterans’ Handicap Chase (3m).

The Barnstaple based handler, celebrating his first jumps winner in 262 days, said: “When I saw Elegant Escape had been dropped, I thought it might be tough but it shows you he likes running off lighter weights in better contests. He likes it here and it just suits him.

“He has always looked like being a half decent chaser. Dancing Shadow has done well in these veterans’ races and he would have the class to run in the final of it.

“I’ve never hit the cross bar so many times but we have had a winner on the Flat recently and now over jumps so hopefully we are creaking into action.”