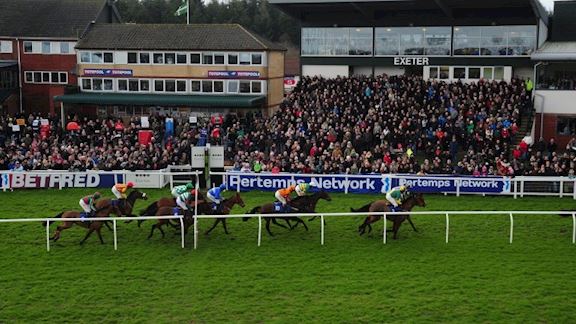 The prestigious Exeter Racecourse intermediate final takes centre stage on a six race card at Exeter on May 8, when the glitz and glamour descend on Haldon Hill with the fixture coinciding with the course’s annual ladies’ night.

An Intermediate Race is open to any horse, which has not won any flat race (other than a National Hunt Flat Race) under the rules of the Jockey Club or other racing authority or any “Mens”, “Ladies”, “Mixed” Open or Intermediate Race at a point-to-point meeting. Exeter has sponsored the series in the Devon and Cornwall area for more than ten years to support racing at an amateur level.

General manager Jack Parkinson said: “We really enjoy attending our local point-to-points which is invariably an interesting, sociable day out and it’s a great way of extending our support by sponsoring the races.”

Seven qualifiers were staged this season with all runners eligible to run in the final, kicking off at Ottery St Mary in November when Will Biddick guided Moreece to success. The diminutive 15.2hh, who hails from Jonathan Lean’s yard in Pyle, Wales, was a ready winner, scoring by an impressive 20 lengths.

Then it was on to Chipley Park where Glamorgan qualified Jonathan Tudor-trained Blazing Tom landed a nice touch, having been backed from 10-1 into 3’s. The seven-year-old made steady progress under his confident rider to tackle Inch Rock at the penultimate before staying on doggedly for Bradley Gibbs up the final incline.

At Wadebridge The Two Amigos, ridden by Darren Edwards and owned by the Bradley Partnership, scored a very easy victory over the only other finisher Ambitious Pursuit. The Midnight Legend gelding was left well clear when nearest pursuer High Priority departed at the 15th fence.

Palmaria, a winner of a hunter chase at Exeter last month, stepped up to intermediate in emphatic style at the South Pool harriers meeting at Buckfastleigh readily winning in the hands of Bryan Carver for Caroline Keevil.

Ballybane followed up his Buckfastleigh success when staying on gamely to beat Prince of Poets and Creative Inerta at the Lamerton’s fixture at Kilworthy. Melanie Dixon’s progressive gelding was giving 26-year-old David Prichard his second winner of the season.

Dean Summersby saddled Honest Deed to win at Cherrybrook under Darren Edwards at the expense of front running Prince of Poets.

It was back to Ottery St Mary for the penultimate qualifier where the Pidsley family’s Eastern Calm and Christopher Barber were victorious.

Trebundannon in Cornwall provided the location for the last of the qualifiers with the Culverwell Racing Club’s Mistress Massini, trained by Teresa Clarke winning in good style under Will Biddick for the

Jack Parkinson said: “It’s been super series and we’re proud to support point-to-pointing in the Devon and Cornwall area. We very much hope a large contingent of pointing fans head on up to Haldon Hill on ladies’ night and join what’s set to be a cracking conclusion to our season here at Exeter when we have some terrific prizes on offer including a two nights stay at Bayards Cove Inn Dartmouth and more than a £1000 worth of prizes from Hoopers at Torquay.”