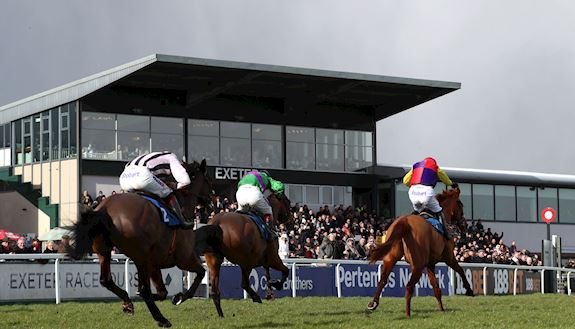 The season concludes in a wave of colour at Exeter Racecourse

Exeter Racecourse concluded its season against the backdrop of stunning blue skies and a plethora of colour as ladies and gentlemen from across the region converged to celebrate Ladies Night.

Dozens came forward for the Best Dressed competitions, with Lynne Hailstone from Kingsteignton judged the overall winner. Her prizes included a stay at the South Sands Hotel in Salcombe, a gin school experience with Salcombe Distilling Company, a voucher for a dress from Henry Hunt and delicious goodies from Devon Hampers. Kathleen Simmons from Truro was second and her prizes included a fabulous pair of Rudds wellies, while third was Exeter’s Rachael Buckley. Royal Navy engineer and technician Michael Lynton from the Isle of Wight was the Best Dressed Male.

Among the judges was Susan Green from the Social Media site, #equinehour. Susan, who lives near Liskeard, said: “It was a super night with so many people looking wonderful. It was a very tough decision choosing our winner but Lynne looked wonderful in her elegant dress and fascinator.”

Appropriately for Ladies’ Night, two female jockeys were in the winners’ enclosure. Exeter’s Lucy Gardner pushed home Doctor Look Here Doc in the 2m7f handicap hurdle, trained by her mum Sue, and joint owned by Paul Tylor and Lucy’s father Des. Page Fuller rode her tenth winner of the amateur’s championship when she landed the 2m2 ½ f mares’ novices’ hurdle on Foxy Act who is owned and trained by her breeder, Chris Down from Cullompton.

The final of the intermediate point-to-point series, which is sponsored by the racecourse, was won by the Nick Dawe-trained Mountain Cliché, ridden by Darren Andrews, while other scorers on the night were the Paul Nicholls-trained Brahms De Clermont, Colin Tizzard’s Templestatefloresco and Equus Amadeus who was a ready winner of the concluding bumper in the hands of Aidan Coleman.

General manager Daniel Thompson said, “It was a great conclusion to the season with a packed crowd enjoying the sunshine and some good racing. It was great to see so many people making such a great effort to dress up for a night at the races. There are plenty of plans afoot here during the close season which will enhance the raceday experience in readiness for our new season which begins on October 12.”