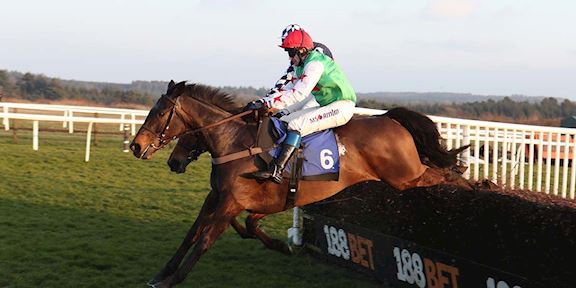 The Healthy Pets Devon National takes centre stage at Exeter Racecourse next Friday (Feb 22) where racecourse director and former champion point-to-point rider Polly Gundry will be hoping to keep the crown in Devon for the second year running.

Polly, who trains racehorses near Ottery St Mary, is planning to run her popular bay Dawson City who won the race last year.

Andrew Thornton, who has since retired, was in the saddle, and when the pair galloped to victory, cheers could be heard across Haldon forest, such was the popularity of the win. Polly said:

“It was great to win as Exeter is very dear to me. I’ve been involved as a director since 2010, and it’s also a very fair track with excellent racing.”

Races with the moniker ‘national’ are run the length and breadth of the country and are immensely popular with owners and trainers alike because they are run over long distances, giving horses like Dawson City the chance to win a big prize.

Polly explained: “What Dawson City hasn’t got is a lot of speed, but he has plenty of staying power, so he comes into his own after they’ve run about three and a quarter miles. Nationals are great for horses who love to race, but aren’t very quick!”

Dawson City has been trained with the race in mind, with plenty of galloping and days in the hunting field to keep him fresh and trim. Polly said:

“He doesn’t really look like a racehorse, and is more of a middle weight hunter, and tends to get a bit portly, so he goes hunting a lot to keep him trim, although he has to wear grass reins as he tends to take a mouth full of grass and then gallop off!”

The prize fund for the race is £25,000 and in the past has attracted much loved horses. Since 1998, the race has taken place just as the early signs of spring begin to emerge and Vince Slattery was on board that first ever winner with Workingforpeanuts coming home a distance in front of his seven rivals. Joe Tizzard has won three Devon Nationals and Sir Anthony McCoy has won it twice, on Samlee for Philip Hobbs in 2000, and Teeming Rain for Jonjo O’Neill in 2009, the only horse to have won consecutive runnings of the race. Nigel Twiston-Davies has saddled the winner twice, with duel Grand National-winning jockey Carl Llewellyn winning on board Spanish Main in 2003, and Paddy Brennan on Ammunition in 2011. The reigning champion jockey Richard Johnson was the victor in 2008 aboard Obaki De Grissay.

It’s not unusual for long-priced horses to spring a surprise and last year’s winner, Kingswell Theatre, won at 20-1. In 2013, The Clyda Rover was 22-1 and in 2011, Ammunition was the 16-1 winner. It’s a race to try your luck in and go for the jockey wearing your favourite colours, or the horse with the best name!

Local horses often land the spoils too, with Flying Award, trained by Sue Gardner near Exeter, winning in 2014, Jeremy Scott’s Clash Duff, who is trained on Exmoor, the victor in 2012 and Dawson City winning last year.

General manager Jack Parkinson said: “The Devon National is a cracking contest and always very competitive. It takes place over a marathon distance, so it gives those that might not be the quickest, but can keep up a relentless gallop, the opportunity to race for significant prize money.”

Advance bookings offer a popular £5 offer for pre-booked Grandstand and Paddock tickets for groups of ten or more. The first race is off at 2.00pm, with gates opening at 12.00pm. A free bus from Exeter St Davids (12.15pm) and Exeter Bus Station (12.30pm) returning half an hour after the last.

More details can be found at www.exeter-racecourse.co.uk