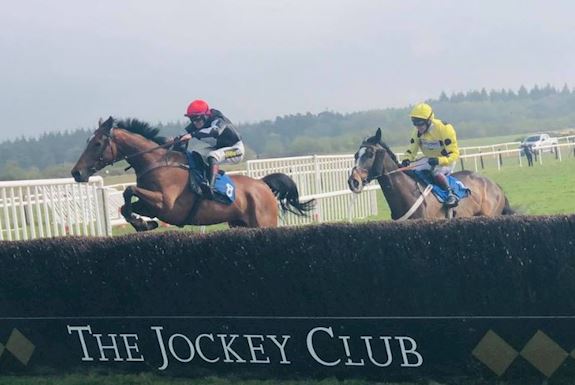 Sam Twiston-Davies took up the lead just before jumping the final fence and pushed him out to score a two lengths success from Sandhurst Lad.

The seven-year-old is ridden everyday by winning trainer Nick Williams who said: “I ride him, groom him, do everything with him.  He’s one of my projects! He’s quite hard work to get going at home so nobody else wants to ride him.”
The gelding has found success hard to come by  in the past, but the step up in trip appeared to work the oracle. “He’s been hard to win with but the owners have been very patient. What pleased me was that you can see he looked happy and he travelled very well,” said Williams.

There was more success for Devon trainers with Merchant House, trained near Honiton by Les Jefford, winning the P2P bumper.

Millie Wonnacott was on board the 20-1 chance and gave him a superb ride, pushing him out for a three lengths success from Full Of Roque.

“He’s been a very tricky horse and its all credit to Jo Buck who has done a lot of work with him. I was just lucky enough to be able to ride him today,” she said.

Winning owner Jackie McCullough bought him as a three-year-old at the Gofffs Land Rover Sales in Ireland. “We’ve brought him on very slowly and we’re thrilled to bits today. It’s the first time Millie has sat on him, and she’s ridden him very well and Les and Jo Buck have done a tremendous job with him,” she said.

Ask Dillon scored a ready win in the opening two miles five furlongs novices’ hurdle in the hands of Paddy Brennan to add to his success at Ascot in December.

Trained by Fergal O’Brien, he was bought at the Cheltenham Sales and is a first foray into racehorse ownership for The Fun partnership.

With Lucy Gardner on the side lines following a nasty fall at Fontwell on Friday, James Best came in for the winning ride on Here’s Herbie, trained by her mother Sue, who easily won the two mile two furlong handicap hurdle.

The 11-year-old had run at Wincanton on Sunday where he finished fourth. “We couldn’t decide which race to go for, and in the end this won was the easier option,” said Des Gardner who owns the horse in partnership with Paul Tylor.

Tudors Treasure scored his second win at the course in three weeks, landing the two miles three furlongs handicap chase. Tom O’Brien threw the works at the eight-year-old to get the better of Kingston Mimosa on the run in and win by a length.

The Warren Greatrex-trained Theatre Territory was odds on to win the Totnes & Bridgetown Races Company Ltd Novices’ Hunters’ Chase and he did so in good style, staying on to get the better of Drumlyn and win by three lengths with Sam Waley-Cohen in the saddle.