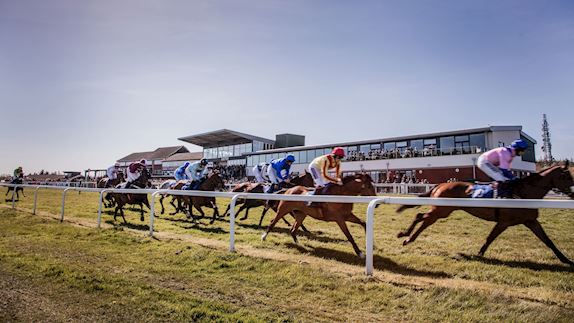 Exeter Racecourse returns to action on Thursday, October 10, and visitors to the track will also be part of its special anniversary celebrations marking 250 years of racing under Jockey Club rules.

Since 1769, Haldon Hill has been the home of racing, although the first record of racing there was during the reign of Charles II. It has been witness to many famous horses, some household names like Viking Flagship, Desert Orchid, Kauto Star and Best Mate, who have been cheered on by thousands who flock to the course.

“Celebrating 250 years of racing is the perfect way to begin our new season here at Exeter. We’ll be putting on a few special touches for the meeting and also, we’ll be giving the first 250 visitors through the gate a commemorative pin badge, which is one to keep in your boxes of memorabilia.”

Local trainers and jockeys are also thrilled at the prospect of the return of racing. The racecourse’s ambassador Bryony Frost said:

“You know it’s becoming the winter when you see Exeter penciled in the diary. It’s our local track, and we’ve had a lot of good winners there, including me as an amateur. We always try to get a winner up on the hill.”

Sue Gardner trains just four miles from the course and has enjoyed many successes, with her daughter Lucy often on board. She said:

“We can’t wait to be racing at Exeter again. We’ve enjoyed a lot of success, including Trans Express on whom Lucy became one of only five female jockeys to ride out their claim. That was probably one of our most memorable racedays ever. We have a few unraced youngsters we will be bringing to Exeter, and Tea Time Fred and Hello Gorgeous will be back too. There is always a lovely atmosphere at Exeter and we’re looking forward to it.”

Committee member Polly Gundry, who trained Dawson’s City to win back to back Devon Nationals said:

“It’s very exciting particularly as we’ve had some nice rain which will produce the best ground in the country. We’re hoping to run a nice horse called Doodle Dandy. The new clerk of the course, Dan Cooper, will have the perfect introduction to racing at Exeter as there will be plenty of runners, with a lot more rain forecast. “

More information about the meeting, including its free bus service, is available online at www.exeter-racecourse.co.uk