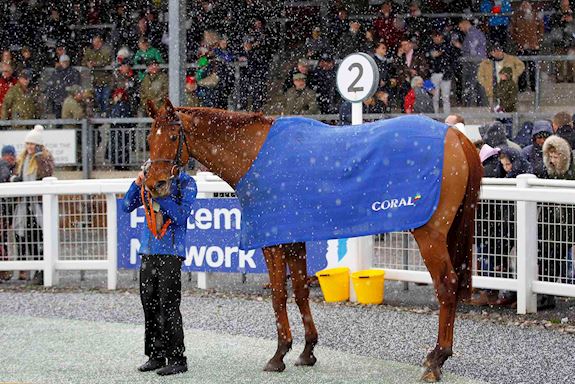 A Midweek Treat at Exeter Racecourse

There’s a mid week treat in store for racing fans at Exeter tomorrow with a packed card full of smart runners.

In the Exeter Conditional Jockeys’ Handicap Hurdle the nine runners include Norse Legend who pulled up last time out at Plumpton, but seems to save his best form for Exeter.

Ben Lund’s Rosserk Abbey, who’s trained by his employer Kevin Bishop, won well at the course in October, and was staying on well when stepped up in trip at Ffos Las nine days later.

He seems to be improving with every run, and could well appreciate tomorrow’s stamina sapping test.

Emma Lavelle’s team have been in fine form all season, and she can add to her tally in the Watch Race Replays At racingtv.com Novices’ Hurdle where she saddles Éclair Surf. The five-year-old won a maiden point-to-point in Ireland in March and was duly purchased for a lofty amount. Hopes will be high that he makes a winning debut over hurdles.

Ian Williams saddles Almost Gold in the RGB Building Supplies Handicap Hurdle. The six-year-old was a beaten favourite at Huntington last time out on his season’s return and he could well improve for that run.

David Pipe saddles Midnight Magic who looked impressive at Wincanton in October when winning a three miles one furlongs handicap chase. If he turns up in similar form, he’ll be hard to beat.

Virginia Chick appeared to relish the track last week when winning the novices’ chase, and the Williams’ family – trainer Evan, owner Cath and jockey daughter Isobel – will be hoping for more of the same from the seven-year-old. However, he carries a penalty that might take it's toll.

The opposition could come from another track specialist, Golden Sunrise who landed a three mile handicap chase in October and De Name Escapes me who was second in a three mile chase at Chepstow a month ago after a long lay off.

The Sue Gardner-trained Coeur Blimey is an interesting runner in the RGB Building Supplies  Beginners’ Chase. He has some smart bumper form, and finished fourth in the Welsh Champion Hurdle in his seasonal reappearance in October. He has undoubted ability and it will be interesting to see how he shapes up here.

Other runners include The Mighty Don who was third in the Best Mate Beginners’ Chase and could well come on for the run.

Nordic Combined was third in a listed hurdle at Ascot earlier this month and could go close again in the Follow racingtv On Instagram Handicap Hurdle where the aptly named Haldon Hill could well go close too.

Concluding the card is a mares’ novices hurdle where Queens Cave, Lisa De Vassy and Singapore Sage are likely to head the betting on recent form.

Tickets for Midweek Racing are at their best price until 23:59 today.