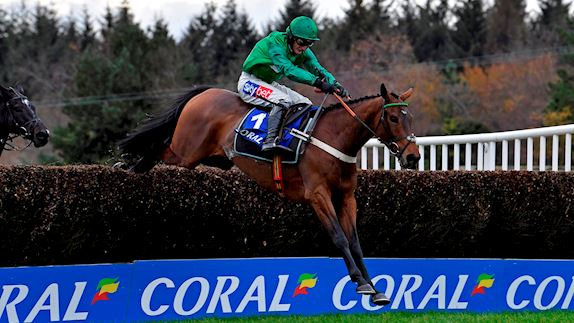 Janika galloped home the 2019 Coral Haldon Gold Cup hero, and was shortened to 12-1 for the Ryanair Chase at the Cheltenham Festival.

The Nicky Henderson-trained six-year-old made light work of his rivals taking up the lead three fences from home and staying on to beat the Paul Nicholls-trained Dolos by two and a quarter lengths.

It was the first time Henderson has won the race since the golden age of Travado, who landed a hat-trick in the race in the early 1990s. The gelding was partnered by owners Simon Munir and Isaac Souede’s retained rider Daryl Jacob who said:

“He gave me a very good feel and we were happy enough with his homework. Coming back in trip was a bit of a gamble but I knew he would be fine, as he's a strong traveller.

"He's a much better horse on soft ground, he enjoys it, but it was plenty quick enough for him out there. It's just riding a little bit dead.

"Two and a half miles on a flat track is his ideal trip. It was a little bit disappointing to keep getting beaten in decent handicaps last year but he's only a young horse, he's had a good break and we were very pleased with him today."

"He needed the run a little bit and he needs to improve a good bit if he's going to go up against the Grade 1 horses, but he was very pleasing here.”

David Maxwell was successful in the opening two miles five furlongs novices’ hurdle on his own Cat Tiger, trained by Paul Nicholls.

“He’ll stay novice hurdling this year and then he’ll win the Foxhunters in 2011!” remarked Maxwell who added: “He won a grade 3 in Auteuil so that rules him out of the Foxhunters this season. I actually fell off him in the way to the starting that race, just ten days after I bought him, and they were all laughing at me.”

Harry Senior looked to have the race in the bag in the D&S Commissioning Novices’ Hurdle, until Sporting John, trained by Philip Hobbs, stayed on like a steam train down the home straight to win far more easily than the one and three quarters of a length’s margin suggests.

Winning jockey Barry Geraghty, a regular visitor to Exeter from his home in Ireland, said:

“He just got going I’d say about 50 yards from the last. The ground here is in great condition - it always is. It’s always fresh and consistent.”

It was a family affair in the three mile Coral Novices’ Steeple Chase with Isobel Williams winning on 14-1 chance Virginia Chick. The seven-year-old is trained by her father Evan, owned by her mum Cath, and she rides out the gelding every day.

Orchardstown Cross demonstrated the continued wellbeing of Jeremy Scott’s Dulverton yard with a win in the three mile handicap chase with Rex Dingle in the saddle. The eight-year-old could be campaigned in the long distance nationals with his next start possibly at Exeter in December in the marathon steeple chase.

David Bass pushed out Those Tiger Feet for a one a quarter length win in the two mile two furlong handicap hurdle from 11/10 favourite Gaurdia and Sean Bowen.

“It was a great performance as he’s a quirky individual and he showed that as he ran all over the course!” remarked winning trainer Kim Bailey who added: “Where we go from here I don’t know, but it’s more a question of keeping his mind in the right place.”

The concluding two miles seven furlongs handicap chase was won by the Neil Mulholland-trained Heavey with Robert Dunne in the saddle.

Exeter’s next meeting is on Wednesday, November 13.