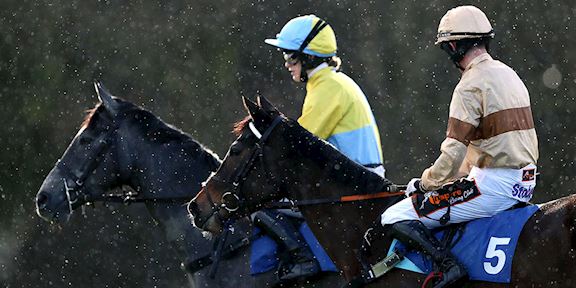 Exeter Racecourse concludes the year, and the decade, with its Christmas meeting where plenty of rain means mudlarks will come to the fore.

Feature race of the day is the Star Sports Handicap Chase, with the four runners – with Le Coeur Net unlikely to run - each in with a chance.

Tom Lacey saddles his recent Sandown winner Johnbb who has gone up 6lbs for that win but he’s stepped up in trip and is likely to go well in the hands of Robbie Power. He’ll face strong opposition from the Venetia Williams-trained Eceparti who has won his last two starts, most recently at Wetherby where he was the 12 lengths winner.

Williams could get her day off to a fine start with Eleanor Bob in the opening Star Sports Mares’ Novices’ Hurdle. The four-year-old won a maiden hurdle at Leicester earlier in the month at the second time of asking and there’s likely to be plenty more to come.

Misty Whisky also has leading claims, having finished second on her hurdles bow at Market Rasen in October.

In the two miles seven furlongs novices’ hurdle, Unwin VC would be a popular winner. The talented five-year-old showed immense promises when winning two bumpers at the start of his career, but has yet to get his nose in front over hurdles.

Exod’ela, from Jamie Snowden’s in form yard, was beaten just two and a half lengths in a 15 runner novice hurdle at Hereford last month and has obvious claims, while Lossiemouth is another for the short list having also finished second on his most recent start at Ayr.

Midnight Tune is the obvious choice in the EBF Mare’s Novices’ Chase. She was the wide margin winner of a novices’ chase at Uttoxeter in November and despite a penalty for that win, looks superior to her opponents today.

Barry Geraghty has been a regular face at Exeter this month, and his moment in the lime light could come on Dostal Phil in the two miles two furlongs handicap hurdle. The Philip Hobbs-trained six-year-old was the winner of a maiden hurdle at the course in March and looks capable of much better, but the danger could come from The Crooner, another from Venetia Williams’ yard who was in winning form at Leicester last week. He was a seven lengths third to Dostal Phil in March,  and is now 5lb better off.

David Pipe scored his first success for the David Pipe Racing Club at the course earlier this month when Dusky Hercules won, and Great Tempo can add another success in the Star Sports Handicap Chase, run over three miles.

From a career high of 128, he now races off 88, which suggests he should be capable of winning this.

Concluding the card is a handicap hurdle for amateur riders and the Jeremy Scott-trained Urtheonethatiwant will be a popular choice on the back of his recent win at Ludlow.