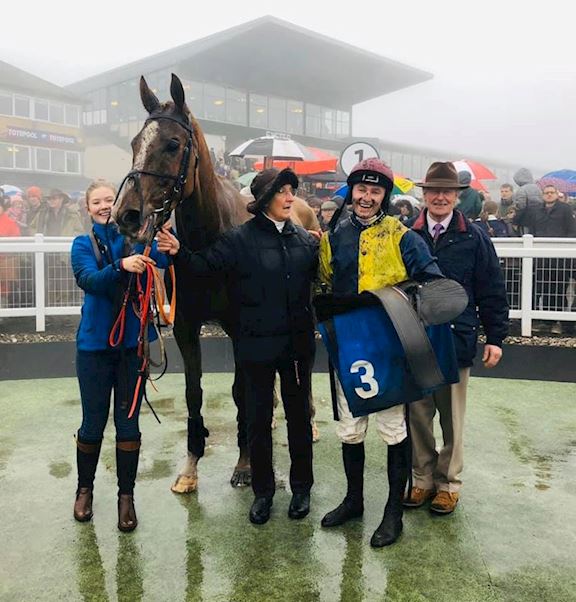 Harry Fry started the year in double form at Exeter yesterday with King Roland looking every inch a star in the making following his easy win in the National Hunt Maiden Hurdle and Captain Drake winning the three mile handicap chase by five and half lengths.

King Roland, hailed as one of the best in the yard by connections, was guided to a 19 lengths win by Sean Bowen who was also on board Captain Drake. “He’s loved the conditions ad he’s a dour stayer. He’s done it well,” said Fry of the winning seven year old who was sent of the 7-2 favourite.

Earlier Sue Gardner had the perfect start to the new decade with Tea Time On Mars winning the Passage House Inn Handicap Chase, the first race on the card.

Adam Wedge steered the 5-2 favourite to a one length victory, much to the delight of Sue whose day had started at 5.30am feeding the horses, cleaning the horse walker and riding out one horse, while recovering from a bout of flu.

“The early start was worth it though,” laughed Sue who added, “He’s a home bread out of Darjeeling and his nick name at home is PG! He’s only a baby and we’ve taken our time with him as he’s building up to be a chaser. And he’s so big that he still needs another year and we hope he’ll make a long distance chaser and go for national-type races.”

Bryan Carver scored a treble, spearheaded by Daytime Ahead who beat the 2-1 favourite Gavrocheka by one and a half lengths. The none-year-old had run two days before at Taunton where she finished down the field but winning trainer Ron Hodges explained:

“We had this race in mind for her as we thought we’d be balloted out at Taunton but we weren’t . She was so perky after Taunton, and this morning and everything seemed to fall into place for her. She loved the loose ground and everything was in her favour. We’re really pleased with her as she’s won four for us now and she’s nicely bred aswell.”

Carver also scored on Sir Psycho for Paul Nicholls, a horse described as anything but by his syndicate of owners, Martin Broughton and Friends. The four-year-old looked hugely impressive, beating the 4-6 on favourite Bullionaire by 31 lengths.

Carver was also in winning form on Tile Tapper who was the impressive 16-1 winner of the bumper, beating evens favourite Truckers Pass by a length and three quarters.

Trained at Buckfastleigh by Jimmy Frost, he was bred and broken in by Chris Honour who trains point-to-pointers nearby at Sigford and owns him with the No Illusion Pasrtnership who include Colin Lewis who owns a Cotswold Stone quarry.