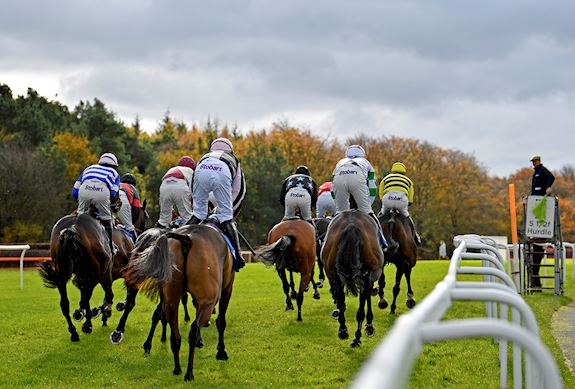 Racing returned to Exeter on Friday 26th February in glorious sunshine and with a competitive card, including the feature Thank You NHS Devon National Handicap Chase.

As well as a double on the card for in-form jockey Micheal Nolan, trainer Seamus celebrated a 500th domestic jumps winner and Harry Fry’s Momella landed the biggest prize of her career so far.

We sent Graham Clark to the track …

Richard Mitford-Slade watched Samuel Jackson execute his season-long plan to perfection by landing the Thank You NHS Devon National Handicap Chase at Exeter – then described it as the highlight of his career.

After missing last season, the nine year old, who claimed the headlines when scoring at 100-1 on his debut under rules at Taunton in 2017, opened his account for the campaign when going one better than his last appearance at the track in the 3m 6½f prize.

Jumping well throughout, the 4-1 favourite moved into contention to battle out the finish of the marathon contest with eventual runner-up Tea Time On Mars over the final line of fences down the home straight.

It was only in the final 100 yards that Samuel Jackson, who finished fourth in this race back in 2019, forged into a narrow lead before going on to score by a neck and complete a double on the day for jockey Micheal Nolan.

Mitford-Slade said: “This has always been the plan this season as he missed last season. We thought as the likes of the Welsh National would be out we would aim for this.

“It is lovely when a plan comes together. You get all nervous about it but I couldn’t be more delighted.

“He is a real trier. He is such a genuine horse and he jumped beautifully. There was some great opposition but luckily he got there first. It is lovely to win the Devon National it is just a shame there are no crowds here.

“We’ve got plenty of support back home that can’t be here but hopefully they will be cheering at the television like I was cheering in the trainers’ room. I probably upset the rest of the trainers up there as I was shouting so loud. One hundred per cent this is a career highlight.”

Sarah Hobbs, wife of the winning trainer, said of the 12-1 chance: “He is such a dream horse as he is easy at home and on the track and he jumps very well. He is the perfect racehorse.

“I’m pleased for the Penny’s (the owners) as they are lovely people. He just had an off day at Newbury the time before last but the jumpers bumper run put him spot on for this.

“Micheal is having a bit of a run of it (in the saddle) but he is a very good jockey. He sees a stride a long way out, a bit like Richard Dunwoody used to.”

Momella secured the most notable success of her career with a tenacious victory in the Join Racing TV Now Mares’ Listed Chase.

Having failed to beat a rival in a listed event at Warwick last time out, the Harry Fry-trained nine year old bounced back to form at the same level in the three mile prize to complete a double on the day for winning jockey Sean Bowen.

The 5-2 favourite, who was placed at Grade One level over hurdles, was Fry’s first winner in 48 days and he joked: “I was almost beginning to forget what this feels like!

“Sean was at his brilliant best there… She is a real tough mare. It has taken a lot of work at home to get her right and patience from the owners, as we know the ability is there but it has taken a while to get the confidence back but that is three wins over fences this season now.

“A spin around the farm on Wednesday morning with Ciara (Fry’s wife) through the woods, over the hunt jumps and back through the stream maybe re-invigorated her slightly. To win a listed race is fantastic.”

Striking A Pose (2-7) moved closer to an appearance in the Grade Three European Breeders’ Fund Paddy Power ‘National Hunt’ Novices’ Handicap Hurdle Final at Sandown Park after following up his last time out Wincanton victory in the Kenn Novices’ Hurdle.

The Colin Tizzard-trained gelding holds an entry Albert Bartlett Novices’ Hurdle at the Cheltenham Festival. However, an outing at Sandown looks more likely for the five year old, who ran out an 11-length winner of the extended two and quarter mile contest.

Joe Tizzard, assistant trainer, said: “He is rated 130 and he was supposed to win like that. He is a gorgeous looking horse and it is just nice to watch all the way round with his ears pricked.

“He won a handicap last time and I thought we would go and bully a small field with a penalty. He is qualified for the EBF Final at Sandown in a couple of weeks’ time. He is probably not an Albert Bartlett horse but off 130, which you wouldn’t think would change, he might be competitive at Sandown.”

Looks Like Power (12-1) secured his first victory since April 2018 to give trainer Debra Hamer her first winner of the season to get the ball rolling for Bowen, with a front running five length success in the Chudleigh Handicap Hurdle.

The trainer’s husband, Paul Hamer, said: “That’s the first winner of the season for us but we hadn’t seemed to be able to do much right as we have had a few seconds and thirds.

“Normally there is something to take him on but today he got an easy lead and it has worked. He has got into a good rhythm and seen the trip out well.”

Seamus Mullins celebrate the victory of Roko George, who provided him with the 500th domestic jumps winner of his career in the Exeter On Haldon Hill Standard Open National Hunt Flat Race.

Mullins, who is the former president of the National Trainers’ Federation, said: “That’s my 500th domestic jumps winner. I’ve had one winner in Jersey and 18 on the Flat. I didn’t realise we were that near until my son was totting up.

“I’m a jumps man through and through and I cherish the jumps. I’ve been a long time at it as I took my license out in 1991 but we got there eventually.

“We’ve had some good ones like The Land Agent and Kentford Grebe, and more recently I suppose Chesterfield winning the Scottish Champion Hurdle would be one of the best.”