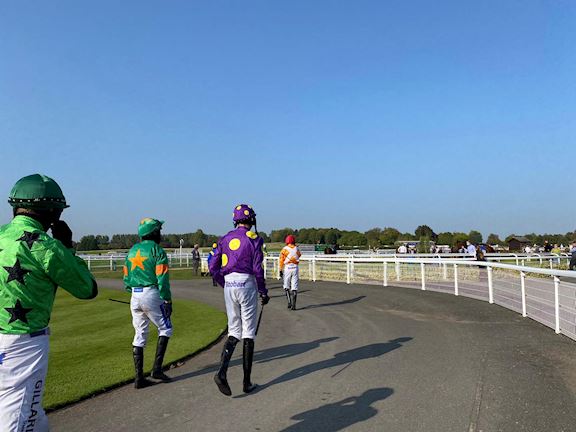 Monday's crowd may not have been the largest ever seen at Warwick racecourse, but its significance for the racing industry could be far bigger than its size when the government finally allows the public back to watch live sport, writes David Hucker.

This was the second of three planned trial meetings aimed at facilitating the return of crowds to racecourses on 1 October, but the government announced the next day that there would be a delay in opening up sporting venues, possibly for six months, a move described by the British Horseracing Authority as “a serious blow to the horseracing industry.”

It was the mare Especially So who got proceedings underway for the first meeting at the course since March when landing the opening Wigley Group Novices' Hurdle by a neck at odds of 66-1. This was a first winner of the season for Devon trainer Kayley Woolacott and she was to strike again in the closing long-distance hurdle, this time with 25-1 shot Tipalong Tyler who led at the penultimate flight and ran right away from her 16 rivals under amateur Josh Newman.

There was drama in the Join Racing TV Now Novices' Handicap Chase as the saddle on Kitty's Light started to slip approaching the final fence and, after surging past Rosserk Abbey and long-time leader Blue N Yellow on the run-in, it finally gave way just after the winning line giving jockey Jack Tudor a nasty fall.

Fortunately, Kitty's Light was quickly caught and, with Tudor back on his feet, they were reunited in time to weigh in to give trainer Christian Williams his third success of the season.

The Biffa Waste Services Novices' Handicap Hurdle was divided into two and it was 11-1 shot Tayzar, having his first run since wind surgery, who came fast and late along the stand rail with Theo Gillard to win the first division for Yorkshire trainer Ruth Jefferson, who is now 2-2 with her runners at the course.

Former Coventry City striker Mick Quinn who, like fellow professional Mick Channon is now well  into a second career as a racehorse trainer, took the second division with Pink Sheets, who had too much speed for Commander Miller on the run-in.

Fergal O'Brien has sent out a regular stream of winners since racing resumed in July and Templepark added to his record in the feature racingtv.com Handicap Chase, racing clear on the run-in to easily brush aside Monsieur d'Arque by seven lengths.

Tuesday's meeting behind closed doors was a much quieter affair, although that wouldn't have worried former champion jockey Richard Johnson or the up and coming Jonjo O'Neill Jnr, who were both in double-winning form.

Johnson kicked off with an armchair ride aboard red-hot favourite Let The Heirs Walk on the first division of the Visit racingtv.com Novices' Hurdle and followed up in the second when making all the running on Grey Spirit.

O'Neill Jnr was on the mark with Present Chief before scoring on Young Wolf in the day's feature race, the Class 3 Watch On Racing TV Handicap Chase.

There is racing at the course again next Thursday, October 1st, with a seven-race card starting at 1.10pm.