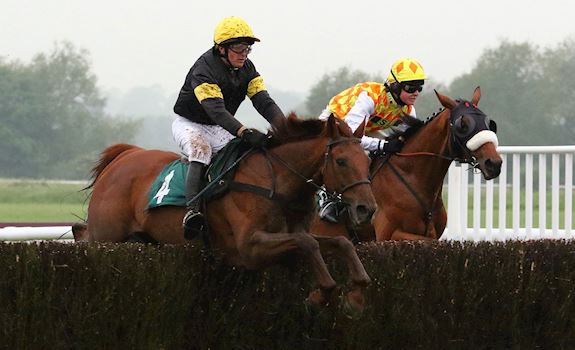 The agreement has been signed just ahead of the running of, the Willoughby de Broke Hunter Chase which sits on the track’s Monday, January 21st programme.

“The team at Warwick have a real personal interest in grassroots racing and we felt that our hunter chases, despite attracting some good horses over the years, have not enjoyed the attention they deserve. By drawing in the interest of a supporting sponsor for all three of races we have the ability to really get some impetus behind them. There is no question that on race days they always attract plenty of public interest and we want to nurture that further.” Andre Klein, General Manager, Warwick Racecourse.

“All three races are really interesting from a racing perspective and I’m really excited that we have the chance to enhance their reputation through Overbury Stud’s involvement. Diving back through their history there are some popular horses amongst the previous winners. Double Silk won the Air Wedding three times in the nineties, he also won the Crudwell Cup. In recent years, form-lines have been very strong, Grand Vision, Bear’s Affair, Mendip Express and Garde Ville are amongst the leading lights in current hunter chase circles and all have notched up success at Warwick”. Jane Hedley, Clerk of the Course, Warwick Racecourse.

As part of the hunter chase promotion all owners who have a horse start in two or more of the races, will go into a draw to potentially win a free service to either Jack Hobbs, Frontiersman, Schiaparelli or Dunaden, who stand at Overbury Stud.

"Overbury Stud are delighted to have the opportunity to be involved in the three Warwick hunter chases to be run this year. I have always taken a particular pleasure from hunter chases, because of the diversity they bring to NH racing, the possibility of spotting and following talented youngsters or watching older horses enjoying racing competitively for longer than they might otherwise be able to. It is also an opportunity for amateur riders to showcase their talents, which is something I struggled to do when riding as an amateur myself. Our plan is to build up the profile of these three races at Warwick so they become a recognised highlight of the hunter chase season." Simon Sweeting, Director Overbury Stud.

For further information contact:
Warwick Racecourse on 01926 405561 or email; andre.klein@warwickracecourse.co.uk
Simon Sweeting at Overbury Stud on 01386 725552