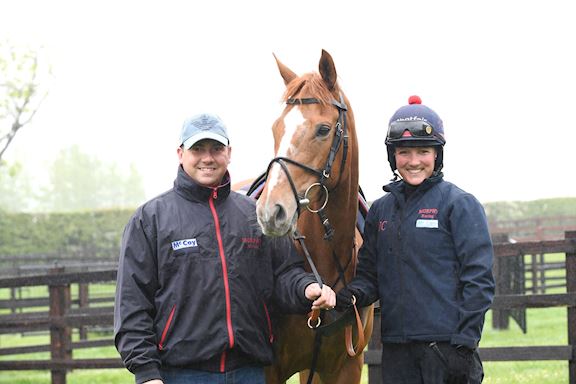 A racing manager from one of the country’s top up-and-coming stables is preparing to step into the saddle as part of a charity race.

Camilla Cotton, from Stratford-upon-Avon’s Olly Murphy Racing, will be competing in the fourth annual Jockey Club Charity Race at the Proudly Warwick Raceday at Warwick Racecourse on Wednesday, May 22.

The race raises money for the Air Ambulance Service, with the racecourse raising around £50,000 for the charity in the last three years.

The raceday is the third instalment of the Qatar Airways May Racing Carnival and is one of the most lucrative fixtures of the season at Warwick, with more than £100,000 in prize money available across the eight race card.

Racing highlights include the £30,000 Wigley Group Carnival Chase and the £25,000 Feldon Dunsmore Carnival Hurdle – the charity race will close racing on the day.

Camilla said: “I’m very excited, I’ll probably be nervous too on the day, but it will be good I’m sure.

“It is for a fantastic cause, supporting the local air ambulance. Everyone who is in racing will agree that it is a brilliant and worthy cause – it’s a charity close to my heart.

“I’ve ridden in a few point to points but this will be the first time I will have ridden on a professional track and my first time taking part in the charity race.

“I love Warwick, it’s a great track, and I’m sure the race will bring out my competitive side!”

Olly Murphy says racing in the region is on the rise and he is looking forward to seeing Camilla in the race.

He said: “It really is going from strength-to-strength here in Warwickshire, our operation is growing all the time and Dan Skelton is seeing a lot of success too.

“It helps having quality racecourses nearby, like Warwick and Stratford. Warwick is one of the best tracks in the country, a big, galloping, fair track. It’s probably a track that deserves to have a Grade 1 there in time.

“Hopefully Camilla will go and enjoy herself and have a good day out. I’m running a couple of horses in the race, they are all raising money for a good cause and hopefully they’ll have some fun while doing so.”

Andre Klein, General Manager at Warwick Racecourse, said: “Proudly Warwick is the stage for some of the best racing on our calendar and also a day to celebrate the community around the racecourse.

“The charity race is now in its fourth year and is a great spectacle. We would like to wish Camilla and the rest of the riders on the day the best of luck as they raise money for a very important cause.”

Gates open for the Proudly Warwick Raceday at 12.20pm, with the first race at 2.20pm and closing with the charity race at 5.55pm.