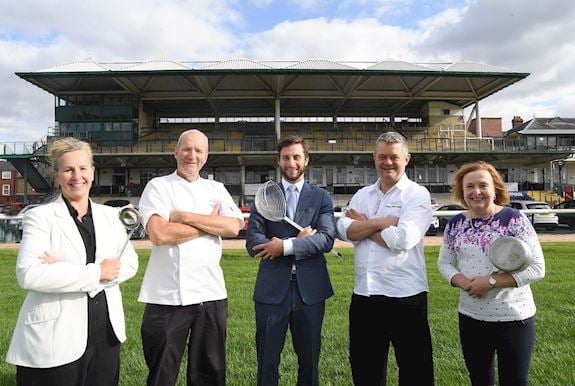 Stars of the kitchen and the race track will be strutting their stuff as racing resumes in Warwick later this month.

Warwickshire-based Michelin-starred chef Adam Bennett will be one of the stars of the show – demonstrating his mastery of the culinary arts to racegoers and foodies.

In 2012, Coventry-born Bennett was Britain's entrant in the prestigious Bocuse d’Or championships and achieved the best ever result by a UK chef.

He will give a demonstration as well as hold a questions and answer session with the producers and suppliers -  and is looking to sample some of the local produce on offer.

“This is my first time ever at Warwick Racecourse, so to have that combined with a food and drink event celebrating Warwickshire is great,” he said. “I will be hoping to catch some racing as well as sampling what is on offer.

“We like to use local suppliers so will I certainly be on the look out for some potential partners from the producers on show.”

The showcase, hosted by Warwickshire County Council, will allow members of the public and commercial buyers to enjoy cooking demonstrations from leading local chefs and sample the marvellous tastes created by the best local food and beverage producers, all against the backdrop of the first major race meeting of the season.

"The food and drink industry in Warwickshire is worth around £418 million, which is three per cent of our total economy. As such it is vitally important to the continued growth of our region.

“Warwickshire County Council will continue to support this important industry to help promote the special producers we have in our county.

“I hope as many suppliers, buyers and members of the race-going public come along to what is shaping up to be a fantastic event.”

The showcase will be open to patrons at Warwick Racecourse from 1.00pm, with the first race of the day set to get underway at 2.10pm on Thursday, September 24.

Exhibitors include Fowlers of Eastwood, which has been developing the craft of cheese-making for more than 14 generations, The Cake Alchemist, which provides a range of cakes that are tailored for Vegan, Gluten Free, Dairy Free, Nut Free diets, and the Hook Norton Brewery.

“We pride ourselves on the standard of food and drink we provide on race days, but playing host to the Warwickshire Food and Drink Showcase will add some real variety.

“Adam is a top name in the culinary world and has brought that worldwide, award-winning skill very much to the fore at The Cross and it is great that he has agreed to come along and give us a demonstration of his talents.”

Registration is free to buyers and exhibitor stand bookings are so anyone interested should register at www.warwick-food-drink.co.uk

FIND OUT MORE ABOUT THE WARWICKSHIRE FOOD AND DRINK RACEDAY HERE.