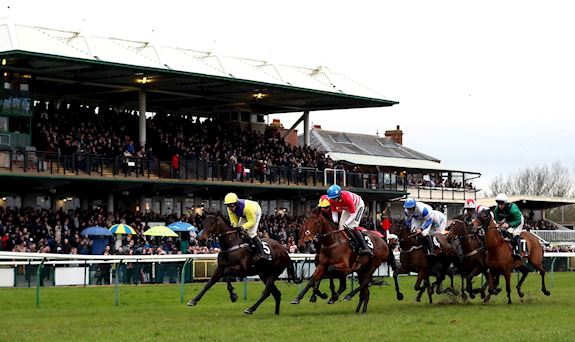 Warwick opened its new season with a double-header on Monday and Tuesday and it proved to a fruitful time for Over Norton trainer Charlie Longsdon, who came away with three winners, including the two big races of the day, writes David Hucker.

The Longsdon-trained Vivas had come to join top-weight Potterman at the final fence in Monday's feature, the Jason Waites 50th Birthday Handicap Chase, before proving the stronger on the run-in in the hands of Aidan Coleman.

The combination struck again in the first race on Tuesday's card with Cardigan Bay, who led three flights from the finish to land the RacingTV Day Pass Just £10 Novices' Hurdle. A dual Southwell winner, Cardigan Bay had to battle hard to see off the challenge of Ferrobin, whose chances probably weren't helped by the 18mm of rain that had fallen ahead of the meeting.

The rain was coming down again as  two went clear rounding the home turn in the afternoon's big race, the £16,400 Weatherbys Racing Bank Handicap Chase over three and a quarter miles, and it went to top-weight Treackle Tart, who out-battled For Good Measure to record her fifth win and Longsdon's second of the day.

Isaac Wonder benefited from the 11lb weight allowance that four-year-olds receive from their elders at this time of the year when just clinging on in a tight finish to beat Twasn't The Plan in the Weatherbys VAT Services Novices' Chase.

One to follow from the race is Supakalanistic, who attracted strong market support before the off and was bang in contention until almost catapulting Sam Twiston-Davies out of the saddle at the third-last fence.

It's been a long wait for Runasimi River to notch her second win, after scoring on her debut in a Hereford bumper back in February 2017. She finished well-beaten from a rating of 112 at the course in May, but has tumbled down the weights to a mark of just 95 and, taking the lead before the final flight, flew up the run-in with Ben Jones to land the Bet At racingtv.com Mares' Handicap Hurdle.

Rex Dingle has had to sit out the early part of the season with a fractured C7 vertebra in the lower part of his neck, suffered in a fall at Ffos Las in May. Having his first ride back on Seeanythingyoulike in the Hook Norton Brewery 170 Conditional Jockeys' Handicap Chase, he was in no hurry to close the gap on the front runners, making steady progress down the back straight before coasting into the lead at the third-last fence.

It was to be no fairy-tale return, however, as Jonjo O'Neill Jr brought Write It Down to hit the front on the run-in and land his 60th win in a career that is very much on an upward curve.

After all the rain, the closing bumper was run in glorious sunshine and it went to Redford Road, who proved too good for favourite Kiltealy Briggs, who should come into his own over fences.