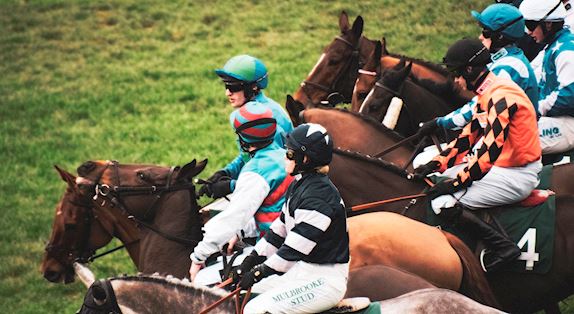 It looks like we are in for another exciting battle for the jump jockeys' championship this season and leader Richard Johnson was in action at the opening meeting of Warwick's 2019/20 campaign on Monday, writes David Hucker.

At the same stage last season, it was Harry Skelton who led the table although, by the end of the campaign, Johnson came out on top to claim his fourth title in a row. This year, Johnson has been setting the pace but, with Skelton's brother Dan now focusing on quality rather than quantity at his Warwickshire stable, it's Brian Hughes who has emerged as Johnson's main challenger this time around.

However, the Skeltons can never be ruled out of calculations and they took the opening Warwick Racecourse Welcomes Racing TV Members Novices' Hurdle with Bbold, a course winner in April, who led before the final flight and ran on to beat Monkey Puzzle.

With both horses sent off the 11-10 joint favourite, this was one for the punters, but favourite backers suffered a reverse in the following Racing TV Club Day Today Novices' Handicap Chase when Anteros made smooth progress to go past Templepark at the final fence and score comfortably for Adrian Heskin and trainer Sophie Leech, part of whose early career was spent working at the course.

Solar Impulse took the runners along at a good pace in the afternoon's feature race, the Jason Waites 50th Birthday Handicap Chase, until a mistake at the last fence before the hill stopped him in his tracks. The Johnson-ridden Dandridge led into the straight, tracked by top-weight Potterman, who jumped into the lead at the penultimate fence.

But, the race was far from over and Potterman was joined by Vivas at the final jump and he proved the stronger on the run-in in the hands of Aidan Coleman who, last week, achieved the feat of riding a winner at every British jumps course.

Two miles and five furlongs was the trip for the following handicap hurdle and it was Royal Ruby and Jeremiah McGrath who took up the running after jumping the third of the 11 flights, although Minella Mojo was never far away. The two were still in command going down the back straight but, once the runners turned for home, the challengers lined up to attack with Misty Bloom and Working Class travelling the best.

Despite not running for 156 days, it was 13-2 shot Misty Bloom, second in a valuable race at Haydock Park in April, who ran on the stronger with Adam Wedge to record her third success.

Tikkinthebox got favourite followers back on track when beating Wisecracker to take the two-mile handicap chase before an open-looking long-distance hurdle brought the curtain down on what had turned into a soggy afternoon.

Run over three and a quarter miles, the field was reduced when Simply Lucky was withdrawn at the start. In the race itself, the pace was set by Western Sunrise, backed from 7-1 into 7-2, but the money stayed in the bookies' satchels as she faded in the home straight where Luck Of The Legion landed two lengths clear over the final flight and increased his advantage on the run to the line.