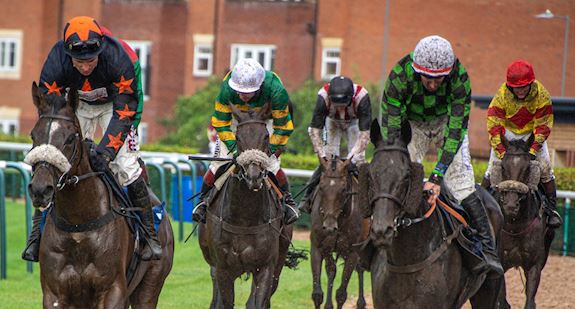 A 151-rated hurdler, Ballymoy was never travelling well when finishing last in Fontwell Park's National Spirit Hurdle in February but, making his seasonal return over the bigger obstacles, was sent off the 8-13 market leader to take the feature race celebrating the career of recently-retired Warwickshire-based jockey Charlie Poste.

All seemed to be going to plan with Ballymoy travelling and jumping well in the lead, but he was passed by Commanche Red down the back straight, a move which seemed to unsettle him. With his jumping going to pieces, he struggled to keep pace with the leaders, but stuck to the task, getting his act back together over the final two fences, although finishing second-best to Nube Negra, who went clear from the last for an impressive win.

Punters had got off to a good start when 11-8 favourite Tea Clipper, making his debut under Rules, survived a mistake at the final flight to see off the challenge of Chance A Tune and land the opening Bet At racingtv.com "National Hunt" Novices' Hurdle over two miles.

A winner of his only point-to-point, Tea Clipper was sent clear of his rivals by champion jockey Richard Johnson at the third-last, a move which proved decisive, as he only had three-quarters of a length to spare at the line, with the runner-up losing nothing in defeat on his hurdling debut.

It was time to collect again for favourite backers in the following Agetur Maiden Hurdle over the longer trip of two miles and five furlongs when Aimee De Sivola and Chester Williams just held the challenge of Torn And Frayed by a neck. The runner-up, who halved in price from an opening offer of 20-1, runs in the colours of Carl Hinchy, whose Chance A Tune had gone close in the opener, and he shouldn't have to wait too long before both get their head in front.

The lead changed hands several times up the home straight in the Ignite Incentives Handicap Hurdle, with Robinshill looking the likely winner jumping the penultimate flight, but he could only finish fourth as Eva's Oskar emerged from the pack to lead on the run-in and deny Jubilympics by half a length, with pace-setter Special Acceptance digging in to be third.

Owner J P McManus had two entries in the Colliers International Business Rates Handicap Chase and it was For Good Measure, runner-up at a slightly longer trip over the course last week, that had the call. Nursed into the race by Richard Johnson, the 2-1 favourite went clear jumping the second-last fence and was always holding the challenge of the mare Chasma to win comfortably.

That win took Johnson to 65 for the season, three ahead of Brian Hughes, who had his only ride at the meeting on Bannixtown Glory in the Follow @racingtv On Twitter Mares' Handicap Hurdle. Cutting out the running, she had no answer to Sid Hoodie, withdrawn from a race here last week because of the ground, who led as the runners straightened up for home, running on well to fight off the challenge of Passing Dream, who had looked like prevailing on the run-in.