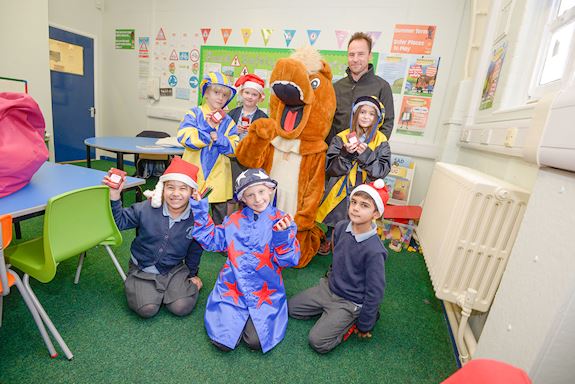 Wilbur and racecourse general manager Andre Klein visited the school to give year three pupils an insight into the 300-year history of Warwick Racecourse and horse racing in the town.

After pupils shared their own memories of the racecourse, they were given the chance to try on jockey silks before being challenged to design imaginative silks of their own – with a festive theme encouraged.

Their designs will be displayed at the racecourse on Thursday, December 12 as part of the Eventmasters Christmas at the Races fixture.

The racecourse team also brought along a few Christmas gifts for the children, including ‘Legends of the Turf’ Top-Trumps-style card game, which are being sold in aid of horse racing charity Racing Welfare.

A total of seven races will be taking place across the afternoon as part of Eventmasters Christmas at the Races, with the first getting underway at 12.20pm and the last at 3.30pm.

It is one the most popular fixtures of the season at Warwick with a strong crowd expected for the penultimate race-day of 2019.

The racecourse is encouraging punters to don their best festive attire for the day, with the chance to win tickets to other fixtures for the best Christmas themed outfits on the course.

Andre Klein, General Manager at Warwick Racecourse, said: “It was great to surprise the pupils down at Westgate Primary School with the visit and they were fascinated to hear about the rich history of their local race track.

“They thought we had only been going for 60 years, so when we told them it was actually more than 300, they were amazed!

“Wilbur was very popular too, spreading some early festive cheer, and we hope they liked the gifts we brought along, which will help them to learn all about the greats of the sport.

“The children made a good start on their silk designs and took them home to keep working on them! We’ll be displaying them all at the racecourse on Thursday, December 12 – for what is set to be a great afternoon of racing.

“We’re looking for racegoers to all embrace the Christmas spirit, put on their best festive outfits and kick-start their Christmas celebrations with us at Warwick.”

Gates open at 10.20am and the first 500 racegoers through the gates will get the festive treat of a mini mince-pie. Racegoers will also be greeted by the sound of The Peas as they arrive at the racecourse.

A range of hospitality packages are still available, including ‘The White Christmas’ package in the Paddock Pavilion, which features a traditional Christmas banquet with hand carved meats served from a German- themed market.

Advanced general admission tickets start from £15 and under 18s entry is free of charge, when attending with a full paying adult.