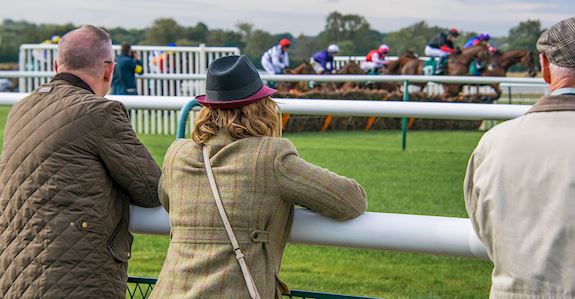 Maire Banrigh put in an exhibition round of jumping to make all the running with Harry Skelton and land the feature Class 3 Use The racingtv.com  Tracker Novices' Chase at Warwick on Friday, writes David Hucker.

Last year, the race threw up a high-class horse in Kalashnikov and the exciting Thomas Darby, last seen when chasing home Klassical Dream at the Cheltenham Festival, was expected to follow in his footsteps. Sent off the odds-on favourite, Thomas Darby was always playing second-fiddle to Maire Banrigh who jumped from fence to fence to come home a length to the good.

Part-owned by John Hales, Maire Banrigh cost £320,000 after winning an Irish point-to-point and, after landing two hurdles races, made light of her burden of 12-6 on her chasing debut at Stratford and stepped up in class here to win again. After the race, both BetVictor and Paddy Power pushed Thomas Darby out to 20-1 for the Racing Post Arkle Trophy at Cheltenham in March.

“She's a very easy horse who switches off in front, or you can ride her from behind” said Skelton.

“She likes good ground, so I'm not sure where we are going next.”

As he had done on the flat, Allmankind, took a keen hold in the opening Try Racing TV For Free Juvenile Hurdle and, after seeing off his closest pursuer Motashakel at the end of the back straight, proved too good for his four rivals, winning by 37 lengths.

A winner of a one and a quarter mile all weather contest at Chelmsford when trained by Michael Bell, he looked to have benefited from a wind operation, but will face stiffer challengers as the season progresses.

Trainer Kim Bailey is one to follow at the moment and his Espoir De Romay made all the running with David Bass to beat 12 rivals in the following novices' hurdle.

“He is a big frame of a horse and I never looked upon him as a hurdler, but a chaser in the making” said Bailey.

“We have always liked him  and he will have three or four more runs this season with chasing in mind next year.”

Lightly Squeeze was a solid 2-1 favourite to take the Four Penny Hotel Handicap Hurdle, but found one too good in top-weight Mack The Man, who belied his odds of 11-1 to win comfortably.

Favourite backers knew their fate early on in the long distance handicap chase when La Cavsa Nostra parted company with Sam Waley-Cohen at the fifth fence. The race produced the best finish of the afternoon with the Richard Johnson ridden Barbrook Star just pipping Follow The Swallow on the run-in.

Adman Sam and Rizzardo came into the home straight locked together in the George Downing Marries Lucy Sweet Tomorrow Handicap Chase, but the petrol tank emptied quickly for Rizzardo approaching the final fence and Adman Sam ran out a clear winner under Lee Edwards.