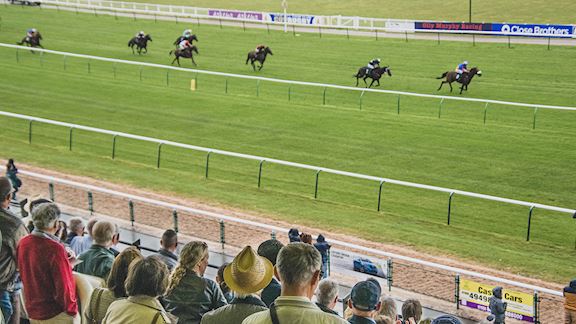 Preview ahead of racing next week

Weather permitting, Warwick's jumps season continues next Thursday with the Eventmasters Christmas At The Races meeting, with a seven-race card starting at 12.20pm, writes David Hucker.

This month's drop in temperature has seen courses, saturated by November's rainfall, affected by overnight frosts, with Ludlow's Wednesday card the latest to be lost. Warwick's drainage improvements saved its most recent meeting, dispersing the standing water on parts of the track, and it should be in good shape for next week's fixture.

The action gets underway with the Agetur UK Juvenile Maiden Hurdle, won last year by David Pipe's Teaser, who has gone on to be a useful novice chaser this summer. Usually, these races see a mix of horses who, like Teaser, have been busy on the flat and who come race-fit, and slower-maturing types for whom juvenile hurdles are their first experience on a racecourse.

Highlight of the afternoon is the £25,000 actioncoach.co.uk Lady Godiva Mares' Novices Chase, a Listed race, which should attract a good quality field. The 2018 running produced a shock result when Atlanta Ablaze and champion jockey Richard Johnson took up the running down the back straight and saw off the challenge of odds-on favourite Jester Jet.

The M-Tec Consulting Group Standard Open National Hunt Flat Race, which brings the afternoon to a close, was won last year by 5-1 shot Keep Rolling, owned by the Mick Fitzgerald Racing Club, who completed a double on the card for Johnson.

Crowds tend to drift away for these races, often run in near darkness at this time of the year, but they can throw up some useful horses and those who stayed to the end at the last meeting may well have seen a couple of bright prospects in the Anthony Honeyball trained pair Belle De Manech and Coquelicot, who dominated the closing stages,

Warwickshire trainer Dan Skelton has continued to send out a regular flow of winners at the course and the success of Emmas Joy in the opening race at the last meeting took his score to five for the current season. He was joined at the top of the leaderboard by Philip Hobbs, who posted a treble on the day, all ridden by Johnson, who is chasing his fifth title in a row.

The course has announced plans for its popular New Year's Eve meeting to ease some of the congestion of the last two years when bumper crowds packed out the main enclosure. It will be opening up the centre of the course, once in regular use with its own stand, but now a caravan and camping park.

The Centre Course Party Enclosure, where Irish band Lampa will be playing to get the party started, will have a tiered grandstand, with plenty of seating inside a giant marquee boasting refreshments from a range of food and drink outlets.