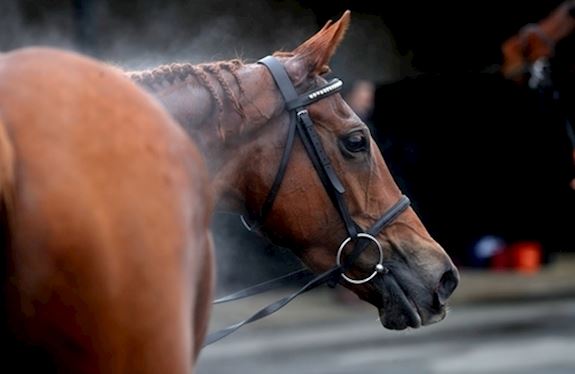 The rain leading up to the meeting continued to fall throughout the day, resulting in a host of withdrawals, including likely favourite Maire Banrigh in the feature race. Her absence left just four runners for the £25,000 Listed contest, with the consistent Sensulano, a 16-length winner at Fontwell Park on her last start, heading the betting.

Ludlow trainer Henry Daly had taken the 2018 running of the race with Atlanta Ablaze and he looked to be on for back-to-back wins when Chilli Filli went to the front at halfway, travelling and jumping well. She still had every chance approaching the last fence, but made her only mistake of the race and, despite jockey Aidan Coleman doing well to stay in the saddle, the momentum was now with Sensulano who went on to score by five lengths.

“She was a useful hurdler, who looked to be a chaser in the making” said winning trainer Noel Williams.

“She'll be staying in this company, although I don't have a particular race in mind for her and will go home and look at the calendar.”

There was a surprise in the opening Agetur UK Juvenile Maiden Hurdle when 33-1 shot Maskada led into the home straight and ran on strongly in the testing ground to hold the late challenge of Palladium. She did come off a straight line on the run-in and, with the winning distance just a short head, the stewards looked at the replay before allowing the result to stand.

Despite three non-runners, there was still a field of 15 to contest the following Bethan-Megan-Elin Maiden Hurdle with the betting suggesting that the race would be between Welsh Saint and the Dan Skelton runner Firak.

Just three managed to complete the course, with Welsh Saint jumping past leader Some Detail at the penultimate flight to score by 15 lengths, with Firak, who looked dangerous turning out of the back straight, fading to finish third. One to note for the future is Major Dundee, who had stayed on past Firak at the final jump, only to crumple after clearing the flight.

They came home at wide margins in the Tom Gaughan Memorial Handicap Chase as Leighton Aspell, success earlier on Sensulano, completed a chase double when making all the running on Book Of Gold to beat market leader Western Climate, whose jumping fell short at several fences.

Commentator Martin Harris is one of the best in the business, but even he was hard pressed to make out the colours as the runners lined up to take the last two flights in the VDL Steelweld UK Handicap Hurdle. Out in front, it was 16-1 shot Jamessaintpatrick, on whom Jack Quinlan was deputising for the unwell Lucy Barry, who proved too good for Jimmy Bell and Mr Washington.

Rough Night led from the front to score on his second start over fences in the Brand Ambassadors Novices' Chase for Edgecote trainer Alex Hales, before Fifrelet became another to lead all the way, quickening clear on the home turn to beat a depleted field in the concluding M-Tec Consulting Group Standard Open National Hunt Flat Race.

Racing returns to the course on New Year's Eve with the first race at 12.25pm.