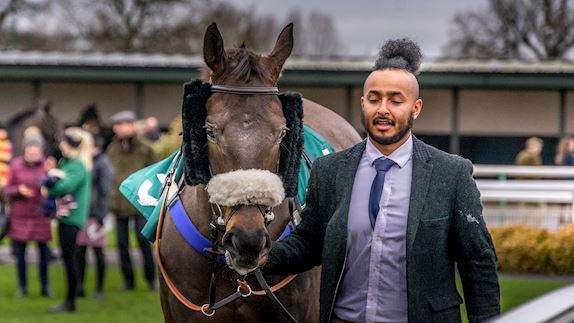 Kimberlite Candy on course for the Grand National after Warwick success

The Randox Health Grand National looks the next step for Kimberlite Candy after his success in a pulsating renewal of the £75,000 McCoy Contractors Civil Engineering Classic Chase, highlight of Warwick's richest raceday of the season, writes David Hucker.

Very few of the runners ever got into contention as Harry Skelton and the blinkered Captain Chaos set a strong pace from the start. They had seen off the challenge of favourite The Conditional, who made a bad mistake at the first fence in the back straight and seemed to find the three miles and five furlongs trip a step too far, but couldn't resist resolute galloper Kimberlite Candy, who swooped at the last and strode clear in the well-known colours of JP McManus for a 10-length success.

With three confirmed front-runners, there was no hanging about in the Grade 2 Hampton Novices' Chase and it was Roll Again who won the battle to take the lead. He was joined by hat-trick seeking Two For Gold down the back straight, who quickly took control of the race and looked to be going like the winner until Hold The Note, well-backed in the morning, but a drifter in the market on course, mounted a challenge at the penultimate jump.

The two took the last together and, in a ding-dong battle up the run-in, Two For Gold proved the stronger, staying the three-mile trip well to earn quotes for both the RSA Chase and National Hunt Chase at the Cheltenham Festival in two months' time.

Racegoers were also looking for Festival clues in the Grade 2 Ballymore Leamington Novices' Hurdle, for which trainer Dan Skelton had been bullish about the chances of Shan Blue in the lead-up to the meeting. He was vying for favouritism with Harry Senior who, having hit a rail and dislodged jockey Robbie Power on the way to the start, was withdrawn on veterinary advice.

When the race got underway, it was Shan Blue who made the running, tracked by Keen On and Mossy Fen, with Irish raider Decor Irlandais in close contention. Keen On was the first to crack, leaving the other three to come to the final hurdle together and, in another thrilling finish, Sam Twiston-Davies drove Mossy Fen past Decor Irlandais close home.

There was a surprise in the opening Join Racing TV Now Novices' Handicap Hurdle over two miles as 14-1 shot Megalodon, pulled up in two of three previous starts, led after the third-last flight under Paddy Brennan and just held off the challenge of Twycross Warrior by a neck.

Kielan Woods and Rough Night set out in front in the Project Management Services Oxford Ltd Edward Courage Cup Handicap Chase, as they looked to follow up their course win last month. A mistake at the open ditch down the back straight didn't help Rough Night's cause and, when Joke Dancer came to challenge at the last, he dived at the fence, handing the advantage to his rival, who stayed on strongly to reward those who had backed him from 9-2 into 100-30 before the off.

Sire Du Berlais, winner of last season's Pertemps Network Hurdle at the Festival, still hadn't qualified for this year's event and trainer Gordon Elliott declared him with top weight in the Warwick qualifier, for which Tedham headed the betting.

It was another Irish runner Silver Sheen who took them out on the second circuit tracked by Egor, Doc Penfro and Run For The Team, running here in preference to a race at Kempton Park.  It needed the judge to separate Silver Sheen and Doc Penfro at the end of the three miles and a furlong, with just a neck between them.

With the first six home qualifying for the series final, fourth place for the staying-on Sire Du Berlais was mission accomplished for Elliott and he will be the one to beat at Cheltenham again in March.