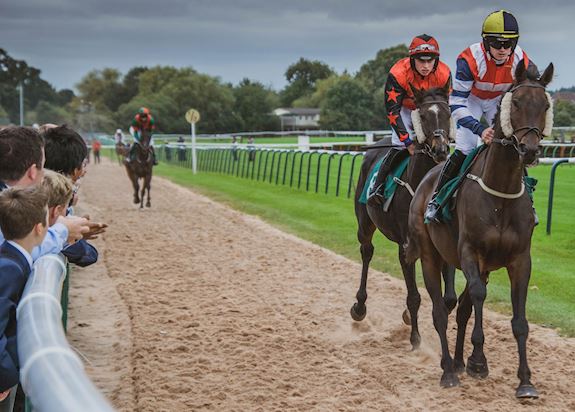 After bumper crowds for New Year's Eve and Classic Chase Day, it was a much quieter time at Warwick on Wednesday for Midlands Raceday, but it proved a good day at the office for jockey Tom O'Brien who landed the feature event on Golden Sovereign, writes David Hucker.

The race for the jockeys' title had taken a dramatic turn at Exeter the previous day when reigning champion Richard Johnson broke his right arm after being unseated from Westend Story, meaning that rival Brian Hughes will have six weeks to build up what could prove to be an unassailable lead.

In Johnson's absence, his rides for the Philip Hobbs stable will be shared between Tom O'Brien and Micheal Nolan and it was O'Brien who took over on Golden Sovereign in the Class 3 Watch RacingTV With Free Trial Now Handicap Hurdle over three and a quarter miles.

Always up the front, Golden Sovereign took a clear lead at the first flight in the back straight and ran on well to deny bottom-weight Flowing Cadenza over the last two jumps.

O'Brien was on Guernesey in the opening Try Racing TV For Free Now Juvenile Hurdle for owner Terry Warner, whose yellow and black colours have been carried by some top-class horses over the years, including 2003 champion hurdler Rooster Booster.

Guernesey was making his British debut after two races in France, but it was another ex-French youngster Blacko who headed the betting, having made a winning start at Taunton last month. He by-passed a race at Ascot at the weekend, where he would have faced the unbeaten Goshen, for what looked an easier task.

It proved to be the right decision by trainer Alan King as, having jumped into the lead at the second flight, Blacko made the rest of the running to see off the challenge of The Pink'n, with Guernesey, who was never a threat from halfway, finishing a well-beaten fourth. The winner earned a quote of 20-1 from Paddy Power for the Boodles Juvenile Handicap Hurdle at the Cheltenham Festival.

Course ambassador Dan Skelton was without a runner in the opening race after Scorched Earth was withdrawn, but he was on the scoresheet in the following novices' hurdle for mares when Molly Ollys Wishes jumped to the front at the penultimate flight and had too much speed for favourite It's Probably Me to bring up the stable's 100th winner of the season.

High Counsel may be at the veteran stage, but he followed up his course win on New Year's Eve with another success in the Askews Handicap Chase. Young jockey Alexander Thorne, who started his career with Totnes-based trainer Martin Hill, is now attached to the powerful King yard and this was his 20th career win, reducing his claim to 5lbs.

There was little to choose between Bob And Co and the 2017 Cheltenham Gold Cup runner-up Minella Rocco in the betting for the Schiaparelli Willoughby De Broke Open Hunters' Chase and, in an incident-packed race, it was Minella Rocco, ridden by Irish jockey Aine O'Connor, who prevailed.

It had all gone wrong for Bob And Co before the first fence down the back straight as, having pulled hard at the head of the small field, David Maxwell suffered cramp and, unable to steer, pulled the horse up.  He remains unchanged in the betting for the Cheltenham St James's Place Foxhunter Chase at 12-1 with Paddy Power, two points shorter than the winner.

The two-mile handicap hurdle was divided into two, with top-weight Jaisalmer getting up close home to collar Bardd and take the first division and favourite Main Fact comfortably landing the second.