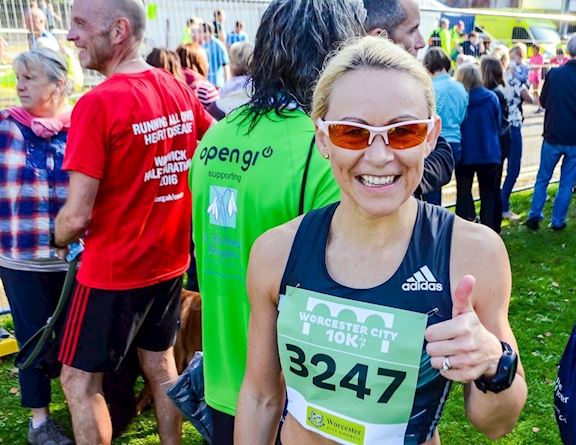 A former Olympic athlete is preparing to run her first ever half marathon and she will be starting the race in Warwick too.

Jenny Meadows, who competed for Team GB primarily in the 800m and 4x400m relay, will be giving starters orders at The Wigley Group Warwick Half Marathon on Sunday, March 1.

The World and European medallist will get the proceedings underway on the morning before joining her husband Trevor to take on their debut half-marathon together.

She retired from athletics in 2016 and is a supporter of The Barrie Wells Trust’s ‘Box4Kids' initiative, which the half marathon will be the trust’s first ever fundraising event. The Trust has previously been entirely funded by Barrie.

Barrie funded Jenny throughout her professional athletics career and she says she is always looking to give back in recognition of that support. Jenny said:

“I’m really excited but it’s also going to be a bit daunting for me as I’ve never actually run a half-marathon before – but at least it will definitely be a personal best!

“We have 18 of my friends running in aid of the Barrie Wells Trust, including my husband Trevor and we’ll be trying to run together whole way round. My whole family will be coming down to support us too.

“Since retiring I’ve been able to see the other side of running, the reasons why people run and the mental benefits too. I’m ultra-competitive but I won’t be keeping an eye on my stopwatch, I want to take it all in and really enjoy the occasion.

“The Barrie Wells Trust does incredible work and has helped thousands of young people to have experiences they will never forget through the Box4Kids initiative.

“The Warwick Half-Marathon will be the first ever fundraising event for the Trust, and that will help the Trust to reach even more even more children across the UK.”

The Barrie Wells Trust’s Box4Kids initiative was set up in 2010. It gives VIP experience at sport and entertainment events across the UK for seriously and terminally ill children, through the use of executive boxes. Barrie added:

“I am delighted that my very good friend Jenny Meadows is both starting and taking part in the event. Its brilliant that she is so supportive of Box4Kids!”

The race has already seen more than 1,200 competitors sign-up to take part.

There will also be a 2.4k family fun run taking place for children aged between six and 16, with all proceeds going to the Barrie Wells Trust. Andre Klein said:

“It’s fantastic that Jenny will be joining us for this year’s half-marathon and I’m sure runners will be keen to see how they compare to a former professional athlete.

“The Barry Wells Trust’s Box4Kids initiative provides incredible experiences for children and we hope this year’s half-marathon will help the charity to provide even more of these experiences.

“We're on track to have more runners competing this year than we did in 2019 and it’s set to be a great event for the town.”

Entry for The Wigley Group Warwick Half Marathon is priced at £30 plus booking fee. Discounts are available for those running as a member of an UK Athletics affiliated club, as part of a large group or participating for a charity.