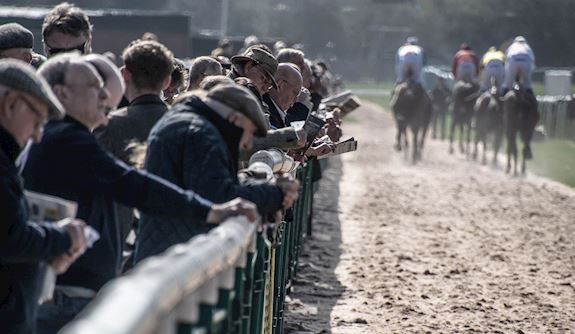 The race, run over two miles, has proved a stepping stone to glory at the Cheltenham Festival and Rouge Vif is now bound for the Racing Post Arkle Challenge Trophy on the first day. Carrying the colours of Kate and Andrew Brooks, whose Saint Calvados won the Kingmaker two years ago, Rouge Vif tracked early pace-setter Torpillo until jumping to the front at the fourth-last fence.

He was quickly joined by Nube Negra, a winner over the course in October and runner-up in the Grade 1 Henry VIII Novices' Chase at Sandown Park last time, and the two had the race between them up the home straight. It was Rouge Vif who asserted going to the final fence to come away for an impressive seven-length success that saw his Festival odds cut from 33-1 to 20-1 by Paddy Power.

Most valuable race of the afternoon, however, was the £50,000 Paddy Power From The Horses Mouth Warwick Castle Handicap Chase over two and a half miles and it went to Clondaw Castle, ridden by jockey in a hurry Paddy Brennan who, immediately after the race, dashed by helicopter to ride at Newbury 90 minutes later.

Clondaw Castle was another to have his Festival odds cut, with Paddy Power trimming him from 25-1 to 16-1 for the Brown Advisory Handicap Chase.

Those studying geography amongst the large group of students in another big Warwick crowd were the only ones likely to know the origin of the name Trincomalee, lining up for the first race, the Join Racing TV Now Novices' Hurdle. Named after a resort in Sri Lanka's Eastern Province, he led approaching the final flight and ran on strongly to see off the challenge of Firak, on whom Harry Skelton looked to have timed his challenge to perfection, only for his mount to lack an extra gear when needed.

Favourite One Touch had made much of the running before dropping back quickly and being pulled up and followers of the market were out of luck again in the following Cheltenham Preview Here Thursday 5th March Handicap Hurdle when Bard Of Brittany had every chance, but couldn't go through with his effort after the penultimate flight.

The race went to 9-1 shot Ask Himself, who hit the front on the turn for home and had plenty in hand to see off Pop The Cork, who was his only real challenger on the run-in.

Indefatigable gave weight and a beating to her seven rivals in the Paddy Power 31 Sleeps To Cheltenham Mares' Hurdle (Listed Race) over two miles and five furlongs, although a mistake at the second-last flight almost let Copper Gone West, who had been prominent from the off, back in with a chance. A better jump at the final obstacle put the race to bed to bring up the fifth winner of the season for Banbury trainer Paul Webber.

There was an open look to the Larkshill Engineering Handicap Hurdle, the longest race of the day over a trip of three and a quarter miles, with hat-trick seeking Urtheonethatiwant and Lord Getaway heading the betting at 6-1.

But, it was one of the outsiders Fortunate George who led off the home bend and established a commanding lead to give jockey Henry Platt a first career win.

Cadzand was made favourite to take the closing Watch Irish Racing On Racingtv Intermediate Open National Hunt Flat Race and looked to have the race in the bag when he struck the front with Harry Skelton over a furlong out.

But, Skelton could see the white face of Sizable Sam looming on his inside and Jeremy Scott's horse ran on well to step up on his promising Wincanton debut.