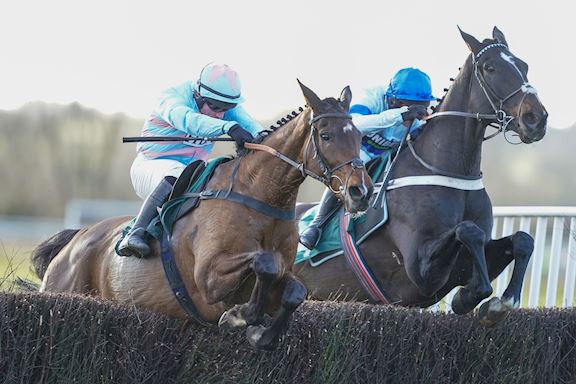 WARWICK RACEDAY ROUND UP

A seven race card at Warwick on Friday 26th February provided plenty of clues ahead of the upcoming Spring festivals.

Cabot Cliffs demonstrated why he might be a force to be reckoned with at Cheltenham next month, Espoir De Teillee might well be Aintree-bound after his victory and Alan King is excited about Jay Bee Why’s future.

We sent Nick Seddon to watch the action unfold …

Cabot Cliffs could be set for a tilt for next month’s Boodles Juvenile Hurdle at The Festival™ supporting WellChild at Cheltenham, after springing a minor surprise to win the South West Syndicate Juvenile Hurdle at Warwick with an all-the-way success.

The Nicky Henderson-trained Heross Du Seuil was a commanding 4-7 favourite for the seven-runner contest after being sent here instead of to Saturday’s Grade Two Adonis Juvenile Hurdle at Kempton Park.

But he rarely threatened to land a blow on the leader as Harry Skelton kicked his charge clear for an unchallenged 17-length success, and it was a performance which saw Cabot Cliffs shortened into a general price of 10-1 for next month’s Boodles Juvenile Hurdle at Cheltenham.

Tom Messenger, assistant trainer to Dan Skelton, said: “It was impressive and he’s been improving all the way through the winter. He came to us as a bit of a nervy horse, and his confidence is sky high now. He’s improving with every run, so it’s very much onwards and upwards with him.

“He’s in the Fred Winter at Cheltenham so we’ll see what the handicapper does today. He’s not in the Triumph, but there’s the Grade One juvenile race at Aintree, so something like that in the spring could be ideal for him. He definitely deserves to take his chance in one of those races, if not both.”

Johnny Burke feels there is a graded performance in Espoir De Teillee, after the nine year old returned from a wind operation to spring a 25-1 surprise in the Budbrooke Handicap Chase.

And although Espoir De Teillee does not have any entries for next month’s Festival supporting WellChild at Cheltenham, jockey Burke feels that there could be a nice race in him at some point.

He said: “It was a very good performance. He’s a horse that’s had his problems and he’s lightly-raced, but when he’s good and on a going day he’s very good.

“He jumped well today and got into the race nicely. He’s just a horse who needs confidence. He filled me with confidence today and it was pleasing to see him find for pressure after the last, so it was good.

“If he can get on a roll and keep sound and well, there’s no reason why he can’t keep on progressing. The feel he gave me was one of a graded horse, and a flat track like Aintree could suit him.”

Another horse with a bright future is the Alan King-trained Jay Bee Why, who justified odds-on favouritism to pick up a second win at Warwick in the British Stallion Studs EBF "National Hunt" Novices' Hurdle.

The six year old is building a good record at the track and held his own in last month’s Grade Two Ballymore Leamington Novices’ Hurdle – form which has since been boosted by the fourth-placed Midnight River winning in good style at Ascot last week.

A delighted King hinted that he will show patience with his charge, having opted against entering him for next month’s Cheltenham Festival.

He explained: “It was a nice display. He’s just growing up all the time, and I love the way he settled today and jumped well. He probably wasn’t doing too much between the last two and then went on and quickened up, so I’m pleased with him.

“We’re just sort of making him at the moment, but he’ll likely go chasing next year. I didn’t put him in for Cheltenham because he wouldn’t have been ready for that this year, but he’ll run again this season.”

Jockey Charlie Todd was pleased with One More Fleurie, winner of the Watch On Racing TV Novices' Handicap Chase, on just his third appearance over fences.

Trainer Ian Williams’ seven year old was still a maiden until this performance but he showed determination and stamina to catch long-time leader Bardd in the final strides.

Speaking after the race, Todd said: “He’s been running over three miles, but the last day round here he was a little on the keen side. The drop back in trip has really helped, I rode him good and handy and the boss’s horses are in really good form, so long may it continue.

“He’s finished second in a point over in Ireland, and that was his third run over fences today. Touch wood he’s been very good over his obstacles – he’s quick, he’s nimble – and he’s a horse that I quite like, so hopefully we can get him on a roll.”

Rose Of Aghaboe was so impressive in winning the Every Race Live On Racing TV Mares' Handicap Chase she might find herself back in action in just three days’ time.

Speaking after the race, trainer Nick Gifford said: “She’s an unbelievable mare. She was unsold at the Doncaster sale for £13,000, so I put a syndicate together so we could have some fun with her.

“All she’s done is improve and she just loves the game. We’re going to reach the ceiling soon probably, but that was only her third run over fences and she’s given the syndicate so much fun.

“We mustn’t forget it’s still only her third run over fences, and I think she will improve and wants even more of a trip. She’s in over 3m 2f over Plumpton on Monday because that’s the trip I think she wants.

“It would be very unlike me (to turn her around so quickly), but never say never. If she marches down the yard tomorrow morning there’s going to be a temptation.”

Another who secured victory with a late charge was Moonamacaroona – winner of the concluding race on the card, the British Stallion Studs EBF Mares' Standard Open National Hunt Flat Race.

Trainer Alan King accepted his winner, who went off second favourite in the bumper, had showed inexperience but was pleased with the victory.

He said: “It was a nice performance in the end! She was a bit green, but she knuckled down well. She’s a filly we think a lot of, and hopefully she has a nice future.”

Asked about a possible run in the Grade Two Mares’ bumper at Aintree in April, he replied: “It was in the back of mind and is a possibility, but she’s one very much for the future.”