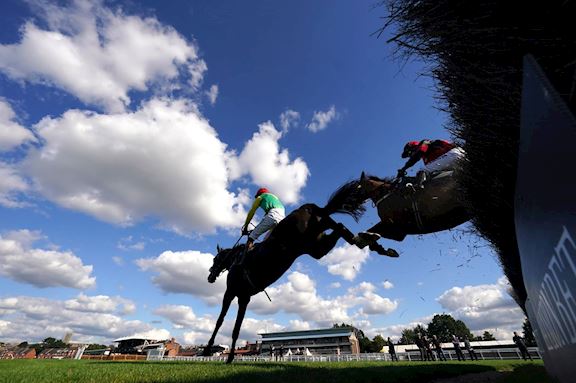 This was the first fixture staged at the course with no crowd restrictions since March 2020 and racegoers were treated to an informative six-race card. The action continues on Tuesday 21st September with Poundland Foundation Raceday.

Brendan Powell believes Vision Des Flos has “got his mojo back” after putting in an exemplary round of jumping from the front to continue his recent revival in the MansionBet’s Faller Insurance Handicap Chase.

Little had gone right for the Colin Tizzard-trained gelding, who prior to his last time out victory at Uttoxeter had scored only once in a novice chase at Chepstow since his Grade Two success in the 2019 National Spirit Hurdle at Fontwell.

With his confidence seemingly restored on his most recent start, the eight year old made light work of a 2lb rise in the weights for that success with a bold display from the front in the two and a half mile feature race.

Although strongly challenged by Pink Eyed Pedro, who was second over the Grand National fences in the Randox Topham Chase at Aintree in April, the 2-1 favourite rallied well under Brendan Powell before prevailing by five lengths.

Powell said: “We had been running him over three miles and I rode him over that trip at Worcester and he didn’t quite get home.

“We dropped him back in trip and he won under Harry Cobden at Uttoxeter and again today. The plan was to jump off and make sure he went a good gallop.

“I didn’t bother checking in behind but I kind of had the idea I would get them in trouble a long way out. He has ground it out really well. He seems to have got his mojo back a little bit I think.

“They can just lose their confidence a bit but thankfully the Tizzard team have done a good job at getting him back. He didn’t miss a beat the whole way and it was good to see him do that.”

Nicky Henderson will consider an outing in the Grade Two Unibet Persian War Novices’ Hurdle at Chepstow next month with First Street, who survived a late scare to maintain his unbeaten record over obstacles as the Evens favourite.

After getting off the mark at Bangor last time out the gelded son of Golden Horn was quickly gathered in by Nico de Boinville after making a mistake at the second last, before landing the MansionBet Proud To Support British Racing Novices’ Hurdle (2m 5f) by an impressive eight and a half lengths in the colours of owner-breeder Lady Bamford.

Henderson, speaking away from the track, said: “He is Flat-bred but he never ran on the Flat and only saw a racecourse for the first time in May.

“He ran in a couple of bumpers and he really should have won one. I would have like to have won a bumper but Nico was keen to step him up in trip so we went over hurdles.

“He made that mistake today, however he picked himself up well - Nico thinks he just took his eye off the hurdle slightly. I was impressed how he quickened up after the last as he was only a length ahead when jumped it.

“The Persian War was the first thing that came into my head as soon as he put one foot over the line.

“When you have got a horse that is fit and well and goes on this type of ground there is every chance we will look at it. There will be some novices from last year starting there but it seems the obvious place to go.”

Tom Scudamore was hoping to beat the rush hour traffic to get home and finish off his gardening duties after steering dual purpose performer Lady Reset (3-1) to glory on his only ride in the two-mile MansionBet Bet £10 Get £20 Novices’ Handicap Hurdle.

The David Pipe-trained five year old secured her fifth win of the year when getting the better of Onehundredpercent by two lengths just 10 days after scoring on the Flat at Sandown.

Scudamore said: “That’s her fifth win this year twice over hurdles and three times on the Flat. It is brilliant for the owners as she has given them an awful lot of fun.

“I’m going to head back and do the strimming in the garden. I’ve done most of it to be fair and I’ve about 10 minutes’ worth left! I’ve butchered the garden this summer putting in a drive and gateposts and I’m getting quite handy at those jobs.”

FOUR UP FOR AN TAILLIUR

Jonjo O’Neill appeared to find the perfect opening for An Tailliur, who completed a four-timer when making his first start in 124 days a winning one by a length and a quarter in the Follow @mansionbet On Twitter Handicap Hurdle over 2m 5f.

O’Neill said of the successful 2-1 favourite: “He is tough and genuine and he loves this quick ground, which is important. He has been a great little horse and done nothing but improve all the way through.

“He had three quick runs then a few little issues. We had to give him time to get over them, so thank God he has got over them nicely.

“We will probably find another little race then leave him off for the winter and go chasing in the spring.”

Paul Webber admitted “it meant the world” to saddle a winner for owner JP McManus after Go As You Please repeated his victory from last year in the MansionBet Watch And Bet Handicap Chase over two miles by three quarters of a length.

Webber said of the 11-4 winner: “It was a good effort. He might have strengthened up again. Although he made a mistake at the last, he jumps brilliantly.

“He is a very genuine horse and we are lucky to have him. To have a winner in these colours means the world.”