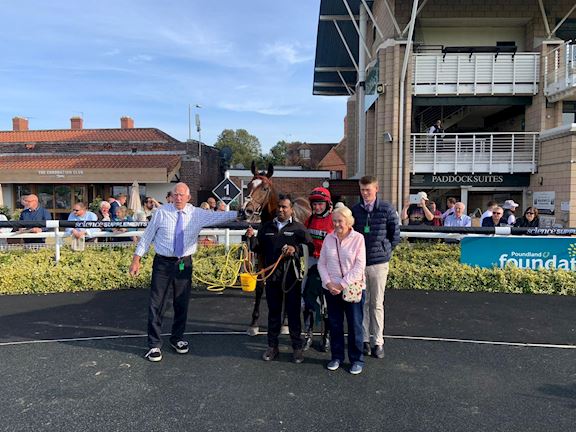 Graham Clark was on course to speak to the winners on the day….

isthebaropen was already a horse “close to the heart” of trainer Gary Hanmer and she went up further in his estimations when securing his first-ever double under Rules.

After watching White Walker taste defeat when sent off favourite at the course on Monday, the Cheshire handler enjoyed better fortunes after the eight year old secured her third victory of 2021 in the Poundland Foundation Proudly Supports Whizz Kidz Mares' Handicap Hurdle (2m 3f) to follow up Sir Tivo’s success earlier on the card. It was a 5.5-1 double for the trainer.

Hanmer said: “The one that got beat here yesterday was a real kick in the teeth as if he hadn’t taken out the second last, he probably would have won.

“I have had doubles with point-to-pointers but this is my first double under rules. This mare is very close to our heart as well.

“I had her grand dam, Monteviot, then we had Border Fusion who won a few for us and the show has now rolled on for the family with her winning.”

In a race which saw Crystal Gazing run out with Nico de Boinville, who was later stood down, at the fifth, and Jessica Rabbit and Persuer exit at the same flight the 9-4 favourite stayed on well to score by four and a quarter lengths.

Hanmer said: “She has had her problems which touchwood seem to be behind her now. I think Will (Shanahan) is good value for his seven pounds.

“She is tricky and quite keen. I was a bit concerned as I thought he took close enough order soon enough but once she has horses around her it lights the fire but she stays well.

“There is a race I noticed for her at Aintree I’ve half got my eye on if the ground stays decent.”

Sir Tivo (Evens favourite) continued to live up to his bargain buy status when getting the ball rolling for Hanmer in the Poundland Foundation Proudly Supports Tommy’s Novices Handicap Chase over two miles.

Picked up for just £800 by current connections the seven year old gelding landed his fourth win over fences in 2021 when prevailing by a length and a quarter from Away At Dawn to initiate a 6.5-1 double for winning rider Sean Bowen.

Hanmer said: “He has been a revelation. He is a bit of a boy and Monday mornings can be a bit dodgy but he is focused when he gets on the course.

“I thought it was a tremendous bit of jockeyship as Brian (Hughes) tried to squeeze up his inside.

“He didn’t shut the door but he just intimated him really. I thought off the bend he was just pricking his ears and I thought there was a bit more to come.

“Speaking to Sean it was my idea to have a go on a bigger track and over bigger fences and utilise the fact of his novice status as he is such a good jumper.”

HAUL AWAY MAKES ALL

Haul Away (11-4) was another to continue his productive summer with a tenacious front running success in the feature Logicor Handicap Chase over an extended three miles and a furlong.

Having scored over hurdles on his previous start at Worcester the Nicky Henderson-trained eight year old made his return to fences a winning one in the when obliging by a neck under Bowen, who was deputising for de Boinville.

Christine Perry, sister of winning owner Robert Kirkland, said: “He did really well out there. He stuck his head out and he stayed there.

“He is a real trier and we are really proud of him. He has had a great summer.

“The idea was to stay out in front and see how it goes and he did really well in doing exactly what he was asked to do.

“There was a bit of panic when the runner-up (Quartz Du Rheu) loomed up but he stuck on well.”

COBBLERS DREAM OFF THE MARK OVER HURDLES

Cobblers Dream has long way to go to reach the same heights of trainer Ben Case’s former stable star Croco Bay, however he made the perfect start to life in Britain in the opening Poundland Foundation Supports Make-A-Wish UK Novices’ Hurdle over two miles.

Sporting the colours of owner Lady Jane Grosvenor that the late Croco Bay carried to glory in the Johnny Henderson Grand Annual at the 2019 Cheltenham Festival the five year old proved a cut above his rivals in the two mile contest which the 11-8 favourite claimed by six and a half lengths.

He said: “I didn’t think the race was that great but we got him out reasonably early as he wants better ground. He is a nice horse and has done it well today.

“Only time will tell how good he is but he can only do as he has done today. His bumper has turned out to be reasonable form and he looks a nice prospect.

“Lady Jane Grosvenor has been a great supporter of ours and she deserves all the success she gets as she puts a lot of money into the game.

“I don’t know if he will be another Croco Bay as we are a long way from that as this is a novice hurdle at Warwick in September. We will just take it step by step.”

Betty’s Belle provided jockey Kielan Woods with his first winner at the track in 649 days when making a winning debut by three quarters of a length in the Poundland Foundation Proudly Supports Kits 4 Kids Mares’ Open National Hunt Flat Race.

Ben Pauling, trainer of the 7-2 chance, said: “She has been nice at home but we didn’t expect her to win her first bumper so it is a huge surprise.

“It is great for the owners as the first horse they had didn’t work out and now they have bred one which takes a bit of doing.”