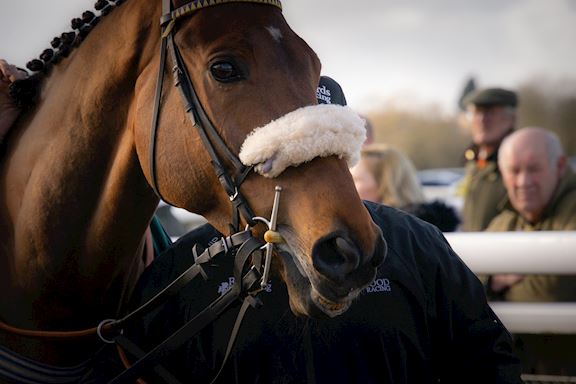 £25,000 FESTIVAL BONUS UP FOR GRABS FOR WINNER OF SATURDAY’S WIGLEY GROUP HAMPTON NOVICES' CHASE AT WARWICK

The winner of the Wigley Group-sponsored Hampton Novices’ Chase at Warwick this Saturday (15th January) will be eligible for a £25,000 bonus if they go on to win any one of three novices’ chases at The Festival™ at Cheltenham - namely the Turners Novices’ Chase, the Brown Advisory Novices’ Chase or the National Hunt Chase.

This is the first time Warwick has offered a bonus incentive, which if collected, will be split between all connections including stable staff. The total prize fund for the three-mile Grade Two Wigley Group Hampton Novices’ Chase is £55,000.

The Agetur Classic Chase Day on Saturday is one of the Midlands’ courses feature race days of the season and this year it will also be the focus of the day’s racing coverage on ITV Racing.

Tommy Williams, Assistant General Manager at Warwick Racecourse, said: “We are hugely excited about offering a bonus fund to the winner of the Wigley Group Hampton Novices’ Chase if they can go on and win at The Festival. Black Hercules did it in 2016 for Willie Mullins, and Next Destination was narrowly denied in 2021 when finishing second in the National Hunt Chase.

“Bringing the stable staff into the bonus is absolutely fantastic and we look forward to following our Warwick winner in the build up to The Festival.”

James Davies, Chief Executive Officer at Warwickshire-based The Wigley Group and a member of the Warwick Racecourse committee, added: “As a race sponsor and supporter of Warwick Racecourse, we are delighted to be offering the opportunity for the winner of our race to collect this additional bonus.

“Stable staff are fundamental to the industry and this bonus allows us jointly to show that at the biggest racing Festival at Cheltenham Racecourse in March 2022.

“Agetur Classic Chase Day is one of the biggest days at Warwick and thanks to the bonus and the ITV Racing cameras we hope to attract an even stronger and more competitive field, which will be great exposure for the course and all of our fellow sponsors.”

The Wigley Group is an ISO 45001 and 9001 certificated company that is active in real estate acquisition, development and construction, as well as asset management of portfolios for both itself and commercial partners.

Based at Stockton House in the Stratford-on-Avon District of Warwickshire since 2019, it directly employs around 40 people. Please go to www.thewigleygroup.com for further information.

Box4Kids Enjoy Day At The Races