FEATURE RACE OF DAY FOUR OF THE FESTIVAL™

The Cheltenham Gold Cup is the most prestigious steeplechase found anywhere in the world.

The cream of British and Irish staying chasers will be lining up for what is known as the Blue Riband of steeple chasing, and the small matter a total of £625,000 in first prize. Many of the past winners of this race such as Best Mate, Kauto Star and Denman to name just three have become legendary names in the world of Jump racing.

Some notable races to watch out for include the first race of the day, The JCB Triumph Hurdle, which takes in a total of eight hurdles over a distance of around two miles, and The Albert Bartlett Novices Hurdle which runs over approximately three miles and immediately precedes The Cheltenham Gold Cup. 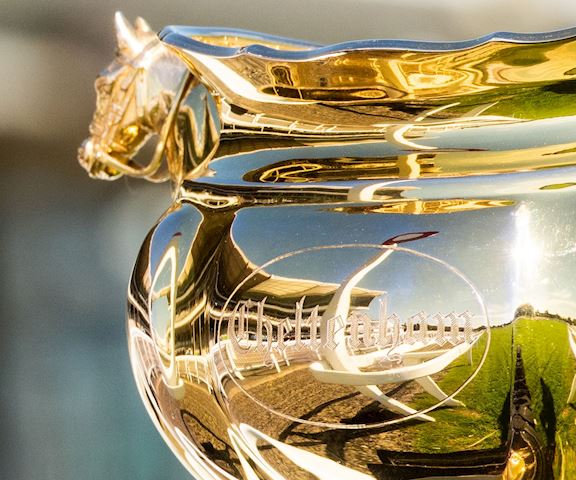 Read all about the history and winners of the Cheltenham Gold Cup Race, dating back to 1924. In 2018, we welcomed home the original Gold Cup. 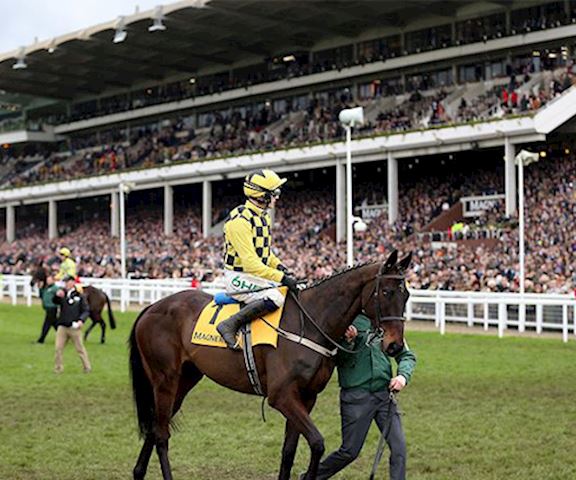 It wasn’t until 12 March 1924 when the race was run as we know it now, although in those days it took place on what is now the Old Course and was overshadowed by the National Hunt Chase. That first renewal was won by the five-year-old Red Splash who earned connections £685!

The race was first abandoned due to frost in 1931 and in 1937 due to flooding, but the five intervening years saw the most prolific horse in the race’s history – Golden Miller. He won five consecutive Gold Cups between 1932 and 1936 and also managed a Grand National for good measure in 1934.

The Vincent O’Brien-trained Cottage Rake became the first multiple winner in the post-war era winning all three renewals from 1948-50. Such was his success that he helped to popularise the Gold Cup, and The Festival™ itself, with the Irish public.

During the 1960s the legendary Arkle cemented his name in racing’s Hall of Fame by winning all three renewals from 1964-66. Such was Arkle’s superiority prior to his final victory that he was sent off the 1-10 favourite and the Tom Dreaper-trained icon remains the shortest-priced winner in the race’s history.

Perhaps the most remarkable feat by a trainer came in 1983 when Michael Dickinson saddled the first five finishers. Bregawn, ridden by Graham Bradley came out on top but can you name the other four? Captain John, Wayward Lad, Silver Buck and Ashley House, in case you were left scratching your head.

Dawn Run created another piece of history in 1986 when Paddy Mullins’ mare became the first, and only, horse to date to win both the Gold Cup and the Champion Hurdle.

Arguably, the most popular Gold Cup winner came in 1989 when the ‘nation’s favourite’ Desert Orchid stormed up the Cheltenham hill under Simon Sherwood. The bumper crowd was ecstatic but twelve months later the ecstasy turned to shock when 100-1 outsider Norton’s Coin bloodied the noses of his more-fancied rivals. Trained by Permit Holder Sirrel Griffiths, Norton’s Coin remains the biggest-priced winner in the race’s history.

A new era of domination began in 2002 when Best Mate, trained by Henrietta Knight, won the first of three consecutive Gold Cups. His final victory in 2004 confirmed him as only the fourth horse to have won the race three or more times.

The Paul Nicholls-trained Kauto Star outclassed his rivals in 2007 but twelve months later he had no answer to his strong-travelling tablemate Denman. In 2009, the pair locked horns again but with Denman only just recovered from a heart condition, Kauto Star gained revenge and became the first horse to regain The Gold Cup.

In 2013, Bob’s Worth gave Nicky Henderson his second Gold Cup winner in three years following the success of Long Run in 2011. The 2014 renewal saw Lord Windermere prevail in a dramatic renewal and 2015 had its fair share of drama as Coneygree became the first novice since Captain Christy in 1974 to lift the Gold Cup.

Recent renewals have seen trainers win the race for the first time with Don Cossack, Sizing John and Native River landing the spoils for Gordon Elliott, Jessica Harrington and Colin Tizzard respectively. The last of those was an epic race as Native River and Might Bite went head-to-head from flagfall before the former found a little extra on the final climb up the hill to land the biggest prize in Jump racing. 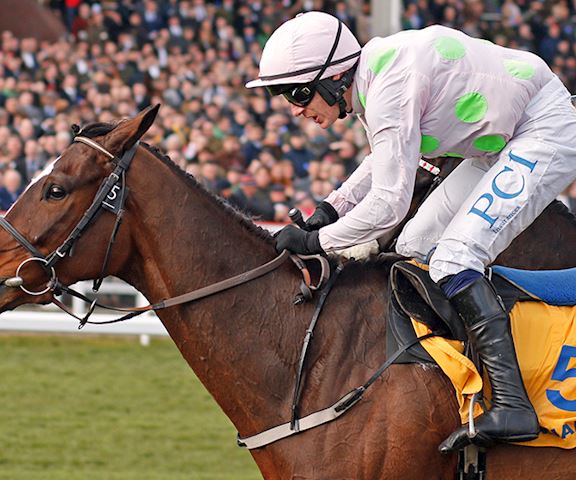