FEATURE RACE OF DAY THREE OF THE FESTIVAL™

It, therefore, suits horses that perhaps find The Betway Queen Mother Champion Chase on the sharp side and those that find The Cheltenham Gold Cup trip a step too far at this stage in their careers.

The Ryanair Steeple Chase, or the Festival Trophy Steeple Chase to give it its registered name, was introduced in 2005 when a fourth day was added to The Festival. Some think that it is the reincarnation of the Cathcart Challenge Cup but that isn’t strictly true as that race was restricted to first and second-season chasers. Run over a distance of two miles, four and a half furlongs, the race was initially granted Grade 2 status and was sponsored by the Daily Telegraph.

Thisthatandtother had proven his liking for Cheltenham by finishing runner-up in that season’s BetVictor Gold Cup, December Gold Cup and re-scheduled Victor Chandler Chase. Memories of his fall, when sent off favourite for the previous season’s Arkle, were soon forgotten as the Paul Nicholls-trained gelding won out in a gripping battle with Fondmort in the hands of Ruby Walsh.

The following year, the unlucky Fondmort gained revenge when landing the race which was now under the sponsorship of Ryanair. The Nicky Henderson-trained 100/30 joint-favourite, needed every ounce of Mick Fitzgerald’s strength as he repelled the challenge of runner-up Lacdoudal.

Paul Nicholls and Ruby Walsh became the first trainer and jockey to win the Ryanair twice when Taranis, the youngest winner of the race, beat the infortunate Our Vic in a gripping dive for the line. A neck was the official verdict – the shortest winning distance in the race’s history. The David Pipe-trained Our Vic had been pulled-up in the inaugural race and finished 9th behind Fondmort before his narrow defeat in 2007 but twelve months later, the year the race achieved Grade 1 status, he gained compensation with a five length victory in the hands of Timmy Murphy.

In 2009 Imperial Commander gave us all a glimpse of what was to come when staying on gamely in the hands of Paddy Brennan to beat the 2006 Arkle and 2007 Champion Chase winner Voy Por Ustedes. Twelve months later, the

Jonjo O’Neill’s Albertas Run proved the biggest priced winner of the Ryanair when dispelling his starting price of 14-1 to win under A. P. McCoy in 2010. He was sent off at 6-1 for the following season’s renewal but the result was the same. Under a typical McCoy drive Albertas Run became the first horse to win the race twice. In fact, he went very close to a hat-trick of victories but at the age of eleven he was unable to handle the finishing kick of his younger rival Riverside Theatre. The Nicky Henderson-trained winner was a well supported 7-2 favourite and he became the first outright winning favourite of the race, thanks in part to jockey Barry Geraghty.

The 2013 renewal saw the widest margin winner of the Ryanair when Cue Card routed his rivals by nine lengths. After running well in defeat in the 2011 Supreme and 2012 Arkle, the 2010 Champion Bumper winner got back to winning ways for father and son team Colin and Joe Tizzard.

Dynaste gave his trainer David Pipe a second victory in the race in 2014 with a two-and-a-quarter-length success, some six years after Our Vic landed the spoils for the Pond House team. Uxizandre gave jockey AP McCoy the perfect Festival send off as he produced a fine front-running display to win the race four years ago.

Willie Mullins landed back-to-back Ryanair Chases in 2016 and 2017 courtesy of Vautour and Un De Sceaux. However, the master of Closutton was denied a hat-trick twelve months later as Henry De Bromhead’s Balko des Flos beat Un de Sceaux by four and a half lengths.

In 2019, it was won by Bryony Frost, the first female rider to win one of the five Championship races, onboard Frodon. 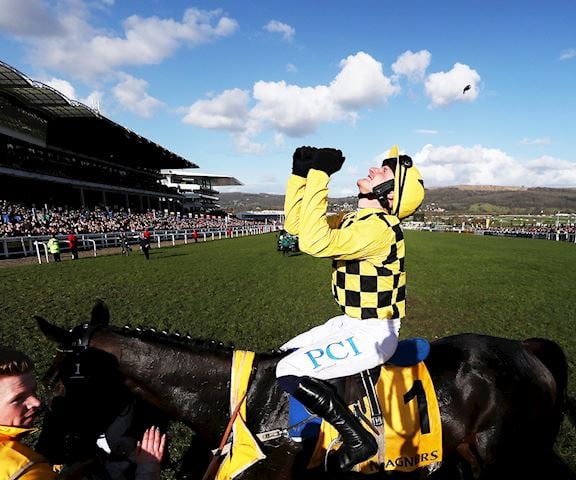