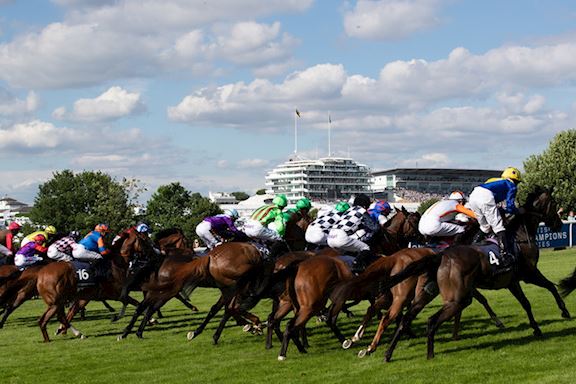 Breeders’ Cup winner Line Of Duty and the unbeaten Madhmoon star among 14 second entries for the G1 Investec Derby at Epsom Downs on Saturday, June 1, details of which are revealed today.

The total number of three-year-olds going forward for Britain’s premier Classic and richest race, which has a total prize fund of at least £1.5 million and is being run for the 240th time, now stands at 107.

Line Of Duty is one of three second entries for Godolphin trainer Charlie Appleby, who is chasing a second successive Investec Derby victory after Masar’s landmark victory in the royal blue colours of Sheikh Mohammed’s racing operation in 2018.

Line Of Duty, a talented son of 2001 Investec Derby hero Galileo, has been successful on his three latest starts and signed off 2018 with a gutsy success in the G1 Breeders’ Cup Juvenile Turf at Churchill Downs, USA, in November.

Line Of Duty is a 16/1 chance for the 12-furlong Investec Derby with Unibet, official betting partner of the Investec Derby Festival, with Too Darn Hot, Europe’s top two-year-old in 2018, the 9/2 market leader.

Godolphin’s other second entries are the unbeaten Dubawi colts Al Hilalee (20/1 with Unibet), successful in a mile Listed contest at Deauville on his second start, and impressive Nottingham maiden victor Space Blues (33/1).

Veteran Irish trainer Kevin Prendergast has not saddled a runner in the Investec Derby since 1996, though that could change in 2019 courtesy of Madhmoon (20/1).

Hamdan Al Maktoum’s homebred – a three-year-old colt by Dawn Approach - won both of his 2018 starts in eye-catching fashion, including a mile G2 event at Leopardstown on Irish Champions Weekend in September.

There are three Irish-trained second entries in total revealed today. Investec Derby-winning trainers Jim Bolger and Dermot Weld each have respective entries in Guaranteed (20/1), a Teofilo colt bred by Bolger and part-owned by his wife Jackie, and Raven’s Pass colt Masaff (25/1), owned and bred by the Aga Khan, who were last seen out when first and second in the nine-furlong G3 Eyrefield Stakes at Leopardstown in October.

Nate The Great (Archie Watson, 40/1) is another second entry with form in Stakes races. The Nathaniel colt was placed in two Listed races last year, when just touched off in the seven-furlong Chesham Stakes at Royal Ascot in June and third in the 10-furlong Zetland Stakes at Newmarket in October.

Kadar (40/1) is one of several exciting winners among the second entries and a potential first Investec Derby runner for emerging Dubai-based owner Phoenix Thoroughbred Limited. Trained by Karl Burke, the €700,000 Scat Daddy colt impressed on debut in a mile novice race at Haydock Park in September, striding out nicely to win by a length and a quarter.

Burke’s wife Elaine entered Libertarian at the second entry stage in 2013 and the New Approach colt duly landed the G2 Dante Stakes at York before a strong-finishing second behind Ruler Of The World at Epsom Downs.

Burke reported: “Kadar has wintered really well and we are delighted with him. He will start off at Newmarket in either the Feilden Stakes over nine furlongs or the Craven Stakes over the mile, that is the plan at the moment."

“Then we will make a decision about where we go after that, whether it’s the 2000 Guineas or the Dante. He has an interesting pedigree being by Scat Daddy and out of a Sinndar mare. I think he will definitely stay further than a mile. I loved him last year and he is starting to show at home that he has a lot of ability."

“You can definitely compare Kadar and Libertarian in a lot of ways. They were both very athletic, long-striding horses, and if anything Kadar is probably a bit more athletic than Libertarian.”

Nivaldo justified favouritism on his debut at Ffos Las before doubling up in great style under a penalty at Kempton Park, both over a mile.

Sir Michael Stoute is the only trainer to date to have won the Investec Derby with a second entry – the Khalid Abdullah-owned Workforce in 2010. The Newmarket trainer has engaged Almania (50/1), a Saeed Suhail-owned colt by Australia who scored second time out in a Sandown Park seven-furlong maiden.

It cost £9,000 to make a second entry for the 2019 Investec Derby. One horse can secure a wildcard entry by winning the 10-furlong Listed Investec Blue Riband Trial Stakes at the Investec Spring Meeting at Epsom Downs on Wednesday, April 24 (if not already entered or a gelding).

The final entry stage for the Investec Derby is the five-day confirmation stage on Monday, May 27, when horses can be supplemented at a cost of £85,000.

Group 1, £1,500,000 total prize fund. Epsom Downs, Saturday, June 1, 2019, 1m 4f 6y. For three-year-old colts (9st) and fillies (8st 11lb). Horses will only be eligible to run provided they have attained a BHA rating of 80 or higher. Horses who do not qualify for a rating may also be eligible providing the BHA Handicapper is satisfied that the horse’s racecourse performances up to and including the day before confirmation merit a provisional assessment of 80 or more. Horses who have not run will not be eligible. Entries closed December 5, 2017, first scratchings deadline March 5 (96 remained), second entries deadline April 2 (*14 second entries), second scratchings deadline May 21, five-day confirmations & £85,000 supplementary stage May 27, final declarations May 30. Maximum field 20 runners plus 2 reserves.