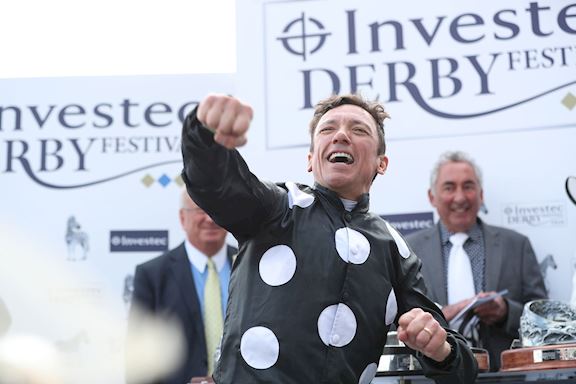 BEST 3 MOMENTS OF THE SEASON

The season seems to have come and gone very quick but what a year we have had at Epsom Downs Racecourse, with some memorable experiences dating back to April and concluding during yesterday's Season Finale.

Race proceedings now pause until 2020 when we return with our Investec Spring Meeting on Wednesday 22nd April, but now seems as good a time as ever to reflect on our 3 Best Moments of the Season in what has been another frenetic spell of Flat action. Take a read below and see if you agree with our picks.

Racegoers on Investec Ladies' Day could be forgiven for not fully soaking up the display from the superb Pinatubo, who would maybe not be seen to best effect until his Royal Ascot display when stepping up to Listed company.

However, what this performance did do was prove that even not at his best, he still looked to have a touch of class and run right away from his rivals on his turf debut as he made a perfect 2-2 career start against some handy opposition, including subsequent Hamilton victor Dragon Command and eventual Sirenia Stakes runner-up Oh Purple Reign, at even-money.

For Charlie Appleby, James Doyle and Godolphin, it was simple. Job done.

But ever since, the ball has just kept rolling with sheer unstoppable momentum and the near 18,000 in attendance on that Friday can be proud to say they witnessed a potentially exceptional racehorse.

Following his Surrey victory, he has progressed hugely, winning a Group 2 at Glorious Goodwood before a demolition job in his first Group 1 across the Irish Sea at the Curragh to earn him a record-breaking rating of 128 - better than the great Frankel and the best mark for a juvenile since 1994.

Looking like the perfect 2,000 Guineas candidate, racing fans will be keeping a close eye on how the career of this now two-year-old unfolds.

After Aiden O'Brien dominated the first duo of Classics at Newmarket, John Gosden heightened his chances of attaining the third instalment by sending two representatives for the Fillies' showpiece during the Investec Derby Festival.
Frankie Dettori opted for Oaks Trials winner Anapurna, as Robert Havlin sat in the saddle of Mehdaayih.
The latter was backed into 11/4 favouritism ahead of her 8-1 stablemate, but the Italian's decision was justified during an exciting renewal of this famous old race.

After leaving the stalls, Dettori and his three-year-old were always prominent, travelling sweetly against the rail before the time came to strike as the group of fourteen turned for home, and stamina came to the fore.

Early leaders Peach Tree and Lavender's Blue soon tired and paved the way for the filly looking to land the hat-trick on the biggest stage, but the dangerous Pink Dogwood and Ryan Moore partnership were soon alongside.

But after a head-to-head battle, Gosden would not be denied a masterful training win and his favoured 48-year-old jockey toughed out victory to put his mounts name into the history books, succeeding once more in the race he had won two years before.

It was finally time. Investec Derby Day arrived as calendar's flicked to June and the race worth more than £1.5m, the biggest contest of this sphere in the world, was prepared for thirteen rivals to swing past Tattenham Corner in a bid to become the best stayer in the sport.

Aiden O'Brien was represented by seven runners, constituting more than half the rivals in the event, and it was difficult to look past most of the individuals from his yard.
Ryan Moore opted for the recent Chester Vase conqueror Sir Dragonet who was supported into 11/4 favouritism as a result, but it would be another Ballydoyle colt who would claim the spoils.

Anthony Van Dyck, like his female counterpart Anapurna, had won the Classic Trial at Lingfield last time out and in a five way clash all the way to the line involving Madhmoon, Japan and Broome, Seamie Heffernan steered his mount home to win by half-a-length at 13/2 following the roars from the thousands in attendance.

The peak moment of our season, and despite not being plain sailing for the son of Galileo since, no one can take his place away from the history books.

We look forward to the next generation of Classic runners returning next season.