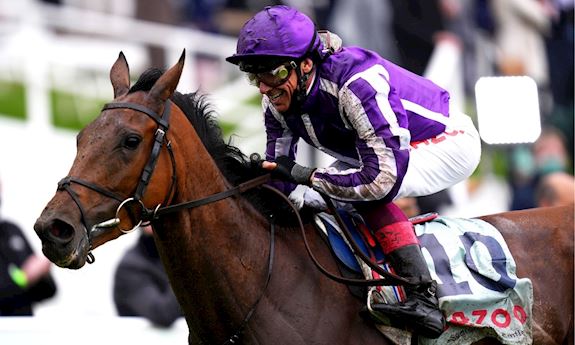 Frankie Dettori rode Snowfall into the record books to win the Cazoo Oaks by the biggest margin in the race’s history – then admitted: “I’ve won many Classics but not one as easily as that.”

The 16-length demolition job at Epsom Downs was a 21st career Classic victory for the 50 year old Italian and a second of the season after winning the QIPCO 1000 Guineas on Mother Earth at Newmarket last month.

Afterwards a beaming Dettori said: “It was unbelievable. Obviously she made the running in the Musidora. I wanted a better position but they were going way too fast. Everybody was fighting to get in the first three so I let them get on with it.

“Aidan said ‘ride her like a good filly, don’t put it in your head that you have to make the running’. I thought out there I had everything beat. In front they had all gone and I had the luxury to take one set of my goggles down. I thought, ‘don’t be clever, just cut through the middle’, and I did.

“The only one horse I hadn’t seen yet was Santa Barbara and I had a quick glance and I was already five in front and she took off, as simple as that.”

Asked if he realised how far clear he had been, Dettori replied: “I knew I was at least eight in front. It is quite remarkable because I pulled up by the stables and everyone pulled up by the winning post!

“I’ve won many Classics but not one as easily as that. I was in the race (Musidora) and we cantered and single-handedly gave it to Ryan (Moore). But I watched the replay yesterday and she was going away from the field.

“It is great. I was watching the documentary on the great Fred Archer yesterday and I’ve equalled his record of 21 (Classic winners) so I’m now only nine behind Lester (Piggott).

“I think I’ve had seven winners (this season). Two Classics, a Chester Cup, two minor races at Newmarket and a Group Three at Haydock so it’s not too bad! I ride for John (Gosden) and unfortunately we didn’t have any Classic runners this year and I was able to jump on a couple of the Coolmore team’s so I’m very lucky.

“The second, third or fourth string are just as good and you never know what you are going to land. I was like a hot knife through butter. I had everything beat around Tattenham Corner. It was a little bit like playing cowboys and indians and I was the cowboy with the gun. I don’t remember the last time I won a race by 16 lengths.”

Dettori’s long career has seen him ride high profile winners for trainers all over the world and he added: “I’ve done the rounds. I’ve been with Sheikh Mohammed, I’ve been with Coolmore, John Gosden, Luca (Cumani) so I’ve been around the block a bit so it is quite weird.

“Racing has been good to me. The Oaks was my first Classic I don’t know how many years ago now, but I’m still talking to you, riding in the big races on the good horses so I will take it and I’m very happy.”

Referring to Snowfall’s future prospects, he added: “Enable was very good. She did the King George, the Irish Oaks and Arc and I wouldn’t put it past her (to do the same) as she is very good.”

Trainer Aidan O’Brien said: "We're obviously delighted. We thought Snowfall was a very good filly last year and we were disappointed a few times, and she had a few things happen to her that meant races didn't work out for her.

“She had a lot of experience, raced a lot and did very well over the winter physically, and the step up in trip as well. She's a very good-moving filly and showed a lot of class. We were just a bit worried about the soft ground today.

"She was very impressive at York and you couldn't have asked her to do more than she did. She came out of the race very well. David who rides her every day was delighted with her. She was obviously doing very well physically, and Frankie was very impressed with her. He said that at all stages she was cantering. She's a very exciting filly for this year.

"We thought she was a proper Group One filly last year. Usually if they show that kind of class, it will come. She's been very unlucky - she just got caught in a maiden at The Curragh one day, and the next day she clipped heels in a maiden and Seamus nearly came off her. Incidents happen to her, and we just went gentle away, but we still campaigned her in good races. She ran in the Fillies Mile at Newmarket - those were the kind of races she was running in, but maybe she got stronger over the winter.

"Santa Barbara - Ryan said cantered into the race, and he just said in that ground she just emptied out on him, so she'll go back probably to a mile and a quarter. She's got loads of class, and we thought she'd handle the ground, but in that ground, the trip was a worry, especially showing the pace that she shows. The combination of trip and soft ground was the worry - if it was a mile and a quarter on soft ground, probably Santa Barbara would have been fine.

"They were both very classy fillies at home. In soft ground at home, Santa Barbara was probably a bit stronger than this filly (Snowfall), but they haven't run together - that would be just watching them go through their work. Santa Barbara canters through her work in soft ground, because she's a big, powerful, strong filly, but Snowfall has developed into a big filly. I said to Frankie today about the ground and he said it was proper soft ground, and she's obviously just a very good filly.”

Asked about Bolshoi Ballet’s chances in tomorrow’s Cazoo Derby, for which he is favourite, O’Brien replied: "Bolshoi Ballet was very impressive on good-ish ground last, and he ended up going to France on very bad ground.

“For me that was a good thing that he did that; the ground was deep in France and you couldn't expect him to like it, but the focus was on would he cope with it, and for me he did cope with it and wasn't beaten that far.

“So we know what he can do on good ground and obviously we are not going to get that tomorrow, but we might get slow ground or dead ground. We can hope, but what we saw in France last year should mean there's definitely a chance. He's never raced beyond a mile and a quarter, but at that trip he never looked like he was stopping, whereas Santa Barbara hadn't ever raced further than a mile, so it was a big jump for her, and today was nearly riding like further than a mile and a half.

"Obviously I don't think it will be ideal for any good ground horse, but Bolshoi Ballet is fit and he's well and he's here, and that's all we can do, really."

Asked whether he might now consider running Snowfall against Love in the Prix de l’Arc de Triomphe, O'Brien replied: "Absolutely; the lads can do whatever they want. I was talking to Frankie about this filly (Snowfall) and the Irish Oaks and so on, and he said, 'Don't be afraid to take on the older horses with this filly, and don't be afraid to do it early if you want’. So there's every chance she could end up there. I didn't really think she wanted a mile and a half, but looking at that, she gets it unreal, doesn't she? As she's gone up in trip, the more impressive she's become."

Runner-up Mystery Angel was only added to the race six days ago when a supplementary entry at a cost of £22,500. The daughter of Kodi Bear amply justified that decision, bagging connections £84,925 as she came home second at 50-1.

Trainer George Boughey said: "She's a superstar and obviously we bumped into a freak. What a fantastic ride from Ben (Curtis), who executed the plan perfectly. We wanted to get to the front and we weren't very well drawn. It was a big call to supplement and it's paid off massively.

"I'm not sure what the future holds for her. We'll get her home and see how she is, but the Ribblesdale comes a bit quick and she's had quite a hard season and has been to France twice, so we'll just mind her a bit. She's obviously a Group One filly, and she's got Group One black type now.

"To finish second in the Oaks is amazing. We've got a growing team at home and everyone is working very hard. Nick (Bradley) and his team have a lot of horses with us now and are big supporters, so it's a very special day for us all."

Seamie Heffernan, rider of third-placed Divinely, said: "I rode her to be placed and she's run a super race."

Roger Varian, trainer of Save a Forest (fourth), Teona (10th) and Zeyaadah (13th), said: "I thought Save A Forest ran great. She got into a bit of trouble when they crossed over. I don't know if it cost her third as he never really stopped riding, but however you look at it she's run a great race.

"We don't think Zeyaadah got home on the ground. She travelled into it nicely but she hasn't seen it out. Teona just wants faster ground and is still a bit babyish. I trained the mother, Ambivalent, and it couldn't be firm enough for her. I should think this filly would be similar."

WHAT THE BEATEN JOCKEYS SAID

“With the ground changing it changed for a lot of people. Mine being a Mastercraftsman, she actually went really well until we got down the hill in the home straight. It just took its toll on her then and she didn’t seem to handle the track even though she has done before. She hung all the way down the hill and didn’t really run the race I’d have liked her to and I think she’d have run a better race on better ground.”

“She’s run really well for a really long way. I got a nice position and she travelled well, she hit a flat spot and I just didn’t have that tactical speed to go with them. I got a bump and she’s just stayed on at the one pace.”

“She settled for the first half of the race which was her main aim. She was actually running a bit behind the bridle which is lovely to see as she did far too much at York but she’ll be a different filly on better ground.”

“I was struggling from halfway.”

“I had a lovely trip round and she just didn’t get home today.”

The 16-length success of Snowfall is the biggest ever in the Cazoo Oaks. The previous record winning distance was 12 lengths, set by Sun Princess in 1983.