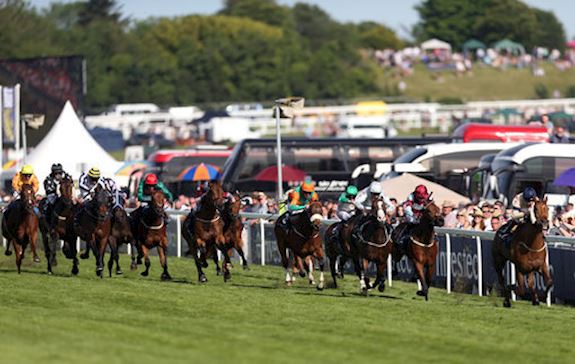 Soto sizzles to possible Royal Ascot date with win in £50,000 handicap
Soto Sizzler (9/2, Jimmy Quinn) might bid to follow in the footsteps of last year's winner Dash Of Spice by winning again at Royal Ascot after beating Byron Flyer a length and a half in the Investec Out Of The Ordinary Handicap.
However, while trainer William Knight is convinced there is more to come he has one eye on a G3 at Glorious Goodwood and wants to ensure that the four-year-old sees the season out, so he will not commit to the Royal meeting unless he is happy that his progressive Mastercraftsman four-year-old recovers in time.
Knight said: "I was thinking about the good mile and six handicap at Goodwood, but Jimmy thinks we should stay at a mile and a half so the Group 3 Glorious Stakes might come under consideration. I think there's definitely another handicap in him first though, and last year's winner went on to win the Duke Of Edinburgh Handicap at Royal Ascot.
"That's a race we've thought about, but at the same time you want him to last the whole season and it might be a bit hard on him. We'll see."
Knight had been concerned about Epsom's quickening ground, but he need not have worried. He said: "He coped on it absolutely fine. He's now won at Goodwood and here, so maybe he likes that sort of track, but it would be very interesting to see him on a flat, galloping track like Ascot. He's always worked very well at home."
SOTO SIZZLES IN EPSOM SUNSHINE
The William Knight-trained Soto Sizzler captured the £50,000 Investec Out Of The Ordinary Handicap.
The 9/2 shot, ridden by Jimmy Quinn, ran on strongly in the closing stages of the 12-furlong event to score by a length and a half.
Soto Sizzler also scored over course and distance at the Investec Spring Meeting in April.
Quinn said: "Soto Sizzler won well.
"He won here earlier on this year so he likes Epsom.
"They went quick early on and we got steadier as we went down the hill.
"I knew he would get the trip, he kept quickening throughout the home straight and I knew it was going to take a fair one to beat him."
Watchable some consolation for Murphy after frustrating two days
Oisin Murphy ended a disappointing two days on a high when steering the David O'Meara veteran Watchable (8/1) to a three-and-a-half length success over top-weight Lake Volta (4/1 joint favourite) in an Investec Asset Management Handicap in which nothing else threatened to land a blow.
Murphy, whose mother had come over from Ireland to see him ride in the Investec Derby, finished no closer than third in seven previous rides at the 2019 Investec Derby Festival, and Telecaster, his mount in the big race and supplemented on Monday at a cost of £85,000, finished last of 13, when the 5/1 third favourite.
However Watchable, who he was riding for the first time, gave him something to smile about with a thoroughly dominant display which saw him smash Mac Gille Eoin's 10-year-old track record for six furlongs by a full second with a blistering 1m 6.20s.
Murphy said: "He's a very tough old horse and he tries really hard. It's testament to David O'Meara and his team that he's won so well, and I'm just so pleased to ride a winner here as it's a very important festival."
Reflecting on Telecaster's run, he said: "He did everything right today and we wouldn't change anything. Hughie [Morrison] had him in great order and I was very happy at the start, but although we got a great position he'd had four races in quick succession. Hopefully we'll see him back to his best later in the year. He's a very good horse and ran the fastest final furlong in the Dante."