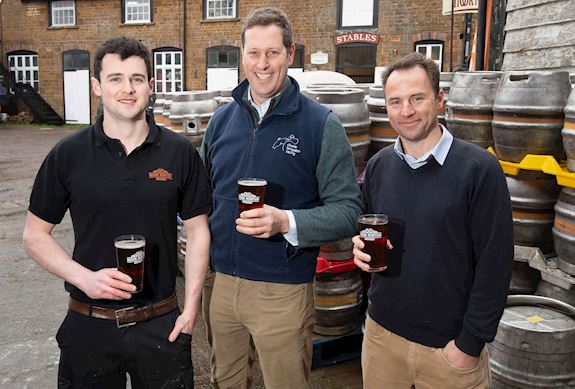 The Kingmaker Ale will be launched at the Gentlemen’s Raceday featuring The Agetur Kingmaker Chase on Saturday, February 9.

Longsdon, whose stable includes Vivas and Hammersly Lake, visited Hook Norton Brewery in Oxfordshire to brew the hoppy citrus beer in preparation for its debut at the raceday.

On the day, the ale will be at the centre of The Hook Norton Race Day Beer Festival.

The festival will feature the extensive range of Hook Norton beers alongside a selection of guest ales from local breweries.

The new beer was brewed in tribute to The Agetur Kingmaker Novice’s Steeple Chase, which is one of the racing highlights of the season at Warwick and will take centre-stage on February 9.

It was established in 1991 and the race is named after the 16th Earl of Warwick, who was known as ‘Kingmaker’ during the Wars of the Roses.

Longsdon is looking forward to trying the new beer at the raceday and is also hoping to have some runners across the day.

“The brewing experience at Hook Norton is certainly something different, we’re usually working with our horses 24/7 so this was a nice break,” he said.

“It’s an amazing old fashioned process at the brewery, a lot of the work is still done by hand and I’m looking forward to trying our new beer at the raceday.

“I’ve always loved Warwick Racecourse as a track, not only is it local for us but it’s always been looked after and is a proper racecourse.

“We’ve had plenty of winners there down the years and if the right race is there, we’ll always be there.

“This year we’ve had a few horses place there and we’re more than likely to have horses there on Kingmaker Chase Day – we’ll definitely be there to try the new beer too.”

The fixture will feature a packed afternoon of racing, with seven races taking place and live music from local Irish Band ‘Lampa’ who will be playing at intervals throughout the day.

Racegoers are invited to dress to impress on the day, with a Best Dressed Gent competition running throughout the day.

Prizes include a free weekend hire of a BMW from BMW Rybrook, a night stay including Bed & Breakfast and a round of golf for two people at Ardencote Manor, two tickets to Ladies Day at The Festival™ presented by Magners and four Hook Norton brewery tour vouchers and 12 Hooky Gold Beers.

“We would like to thank Charlie for visiting the team at Hook Norton Brewery and we’re all looking forward to sampling The Kingmaker Ale on the day.

“The Agetur Kingmaker Chase is a racing highlight at Warwick, but away from the action on track the day provides a great opportunity for gents to dress their best and win some great prizes.

“We are always looking to expand our raceday offering at Warwick Racecourse and we are confident The Hook Norton Beer Race Day Festival will be a hit with racegoers too.”