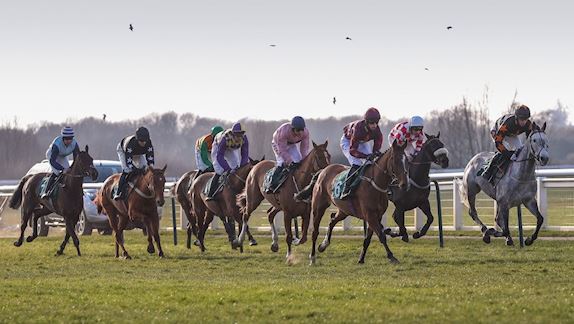 Raceday for novices on and off the track at Warwick Racecourse

Warwick Racecourse will be hosting a series of educational and informative talks for novice racegoers as part of The Agetur Kingmaker Chase Day.

The fixture has a history of attracting top novice racehorses many of whom go on to become legends of the sport.

The afternoon of racing on Saturday, February 8 will feature seven races, with the first underway at 12.55pm and the last at 4.25pm.

Educational activities on the day will include a painted horse demonstration in the parade ring, which will inform racegoers on the muscular, skeletal and fascial structure of the horse.

This is a unique opportunity for racegoers to see how the muscles work and interact with the painted horse to make different movements.

There will also be a parade of former racehorses to showcase the versatility and adaptability of thoroughbreds for other equestrian activities after they retire from racing.

The parade is organised by Retraining of Racehorses (RoR), British Horseracing's official charity for the welfare of former racehorses, and it features former Cheltenham Festival winners Coneygree and The New One, along with Annacotty, Carruthers, Miko De Beauchene and Thomas Crapper.

“This is a great initiative by Warwick and we are grateful to them for providing RoR with the opportunity to increase the public’s awareness of how versatile the thoroughbred is and of the work the charity does.

“It is a wonderful line-up of horses due to parade at Warwick, not just in terms of what they achieved on the track but also with regard to the success many of them are enjoying in new disciplines. They are a credit to the owners and riders who have retrained them and given them a new career and a new purpose.”

Superstars of the past visiting the racecourse include The New One, who won 20 races and over £1million in prize money in his career. Cheltenham Gold Cup winner from 2015 Coneygree will also be at the racecourse.

The parade will showcase the versatility and adaptability of racehorses for other equestrian activities after a career in horse racing.

Talks will also take place from a British Horseracing Authority (BHA) vet, Clerk of the Course at Warwick Jane Hedley and legendary bookmaker Gary Wiltshire, who famously lost a fortune on the day Frankie Dettori won all seven races at Ascot.

Jockeys will also be speaking about their roles and life in the world of horse racing.

The Agetur Kingmaker Novice Chase is one of the highlights of the racing season at Warwick, and is seen as a stepping stone to secure a place at The Festival™ presented by Magners at Cheltenham.

Many previous winners have gone on to top-level glory including Long Run, who crowned his career winning the Cheltenham Gold Cup and Voy Por Ustedes and Flagship Uberalles, who both won the Champion Chase.

The racecourse will also be screening fixtures from the rugby Six Nations tournament during the day with Ireland v Wales at 2.15pm and Scotland v England at 4.45pm after racing.  A large screen has been brought in to show the big match in the Paddock Pavillion.

“The Agetur Kingmaker Novice Chase is always one of the racing highlights of the season at Warwick and it’s a great day for fans of the sport."

We are committed to helping more people fall in love with horse racing and we’ll be getting them off to a flying start on February 8.

“Visitors to the track on the day will get an insight into all the work that goes on behind the scenes, and will also be able to find out more about what happens to race horses when their racing days are behind them.”

Ahead of the race day punters are encouraged to visit www.racingexplained.co.uk to learn more about horse racing.