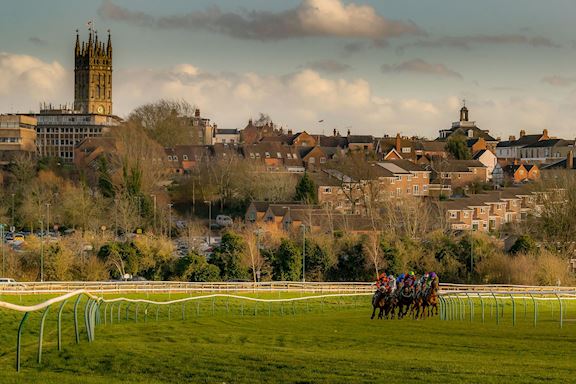 The recent wind and rain has caused havoc with the racing calendar but, despite standing water on the course at the beginning of the week, hopes are high that Warwick's Fabulous Fiver Friday will beat the weather, writes David Hucker.

Recent figures showed racecourse attendances dropping for the fourth year in a row. Warwick continues to buck the trend. Coming in the week of the school half-term break, the meeting, which attracted a crowd of around 3,000 last year, will see adults charged £5, a big saving on the normal admission, and accompanied children under-18 admitted free.

The £30,000 Budbrooke Handicap Chase over two and a half miles tops the bill, with Dan Skelton's Virgilio set to carry top weight of 11-12. A winner of nine races in all, he re-appeared after a long absence at Huntingdon earlier this month, finishing tailed-off, and looks to have it all to do here.

By contrast, Royal Village had been running with admirable consistency last year, although may be a doubtful starter on the heavy ground, and it could pay to side with Cloudy Glen, who has solid form on soft surfaces like many from the stable of Venetia Williams.

The action kicks off at 2.00pm with the British Stallion Studs EBF "National Hunt" Novices' Hurdle (Qualifier) in which a number of trainers have multiple entries, including champion Paul Nicholls with four and Nicky Henderson with three.

Henderson has two entries in the Join Racing TV Now Juvenile Hurdle in the shape of dual winner Grand Roi, currently priced at 25-1 for the JCB Triumph Hurdle at the Cheltenham Festival, and Kempton Park winner Homer, who missed an engagement at Ludlow on Wednesday.

With 28 entries, the Racingtv.com/Freetrial Novices' Handicap Chase looks a potential betting minefield in which dual point-to-point winner Robin Of Sherwood might be worth an each-way punt.

Longest race of the afternoon is the Shipstone Family Celebration Hands And Heels Handicap Hurdle (Conditional Jockeys & Amateurs) over three and a quarter miles and trainer Evan Williams may hold the key with his two entries, the hat-trick seeking Sign Of War, who will handle the testing ground, and Sutter's Mill, pulled up on his last run, but with winning form on soft surfaces.

Although not likely to boast the biggest field of the afternoon, there is an intriguing contest in prospect for the Watch Irish Racing On Racingtv Mares' Handicap Chase in which Harry Fry has to entries in Momella and Outofthisworld, who has fallen twice from her four starts this season.

Goodnight Charlie is a bit of a standing dish around the Warwick course, but Top And Drop, who has been gradually finding her form, could be another for Venetia Williams.

Another large field is in prospect for the closing British Stallion Studs EBF Mares' Standard Open National Hunt Flat Race and Ballycallan Fame, runner up in her only point-to-point, will have been well taught by Dan Skelton for her racecourse debut.