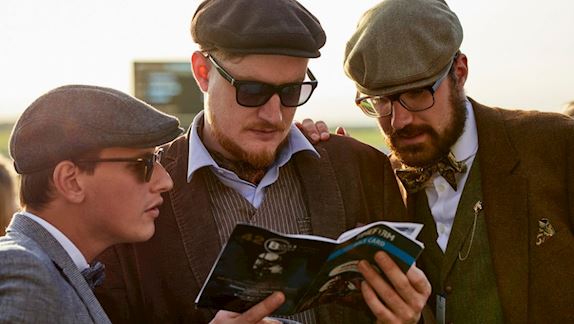 Two of Somerset’s greatest traditions – cheese and cider – proved a winning combination at Wincanton Racecourse on Thursday when an evening of tastes, tipples and fantastic racing had a huge crowd enthralled.

There were cheeses to suit every palette, ranging from Windyridge’s Jalepeno Jack to Barbers 1833 renowned Vintage Reserve, and the flavoursome extra mature from Keen’s Cheddar to the Longman’s Farleigh Wallop.

Several of the county’s best known producers attended the race meeting which was hailed a resounding success and looks set to become an annual event.

Cider manufacturer Oliver Dowding, who farms just two miles from the racecourse, said: “It’s a great combination and our cider has been very popular. We have our own orchards with a variety of apples and also use apples from the locality as well.”

Melvin Glynn from Windyridge, whose innovate cheeses include Chip Shop Curry and Indian Lime Pickle, said: “I’m a racing man and its good to be able to come here, show everyone our cheeses and watch a bit of racing.”

George Keen of Keen’s Cheddar had racegoers enthralled with his tales of tradition and ancestry. “We’ve been making cheese for five generations using raw milk from our own herd which adds to the flavour. There’s a lot of flaovur in a two year old extra mature cheddar!”

Longman’s twice World Championship winning rolled salted butter was for sale alongside an array of cheeses such as Vale of Camelot Blue. “It’s been lovely evening as it’s a different place to show off our wares. There’s been a lot of interest – everyone loves a strong cheddar,” said Iona Fyfe.

Blue skies and sunshine added to the atmosphere with The Enrichments providing the musical entertainment.

General manager Huw Thomas said; “It’s proved a winning combination with people mixing tasting cheese, trying the cider and watching some really competitive racing. We were lucky with the weather too as it was a lovely evening. All our producers seem very happy, and the cider went down very well too. We’re very much hoping to build on this and make it an annual event.”

The season at Wincanton concludes on Tuesday with Smarkets Ladies’ Day with racing returning after a summer break in October.