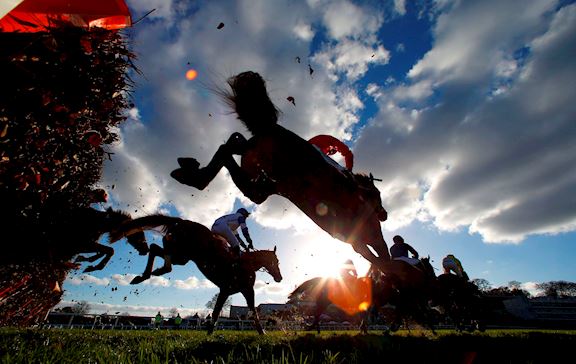 The first of two scheduled meetings at the popular Milborne St Andrew course takes place this coming Sunday when the South Dorset hold their meeting. With the current going reported as good the Hunt have been rewarded with an excellent entry of 113 horses for their 7 races. The highlights of the meeting are the two Open races and one of the series of Owner/Trainer races sponsored by the Oriental Club. There will be the usual attractions to enjoy as well as the horse racing with lots of trade stands to browse, food outlets and bookmakers to have a flutter. The first race is scheduled for 12.15pm.

The Men’s Open race contains an entry from the Cheltenham Foxhunters winner Porlock Bay who has already had his seasonal debut when just beaten by Premier Magic at Chaddesley Corbett in December in a very competitive race. Premier Magic could re-oppose and if so this would be a race to savour. Potential other rivals include Chameron the winner for Ben Sutton at Buckfastleigh on very testing ground, Molineaux who won at the same meeting for Freddie Gingell but he holds an entry in another race which might be the preferred option, Gran Paradiso an impressive winner at Charing but disappointed at Larkhill and the game mare Fishy Story who always runs well at MIlborne. Two interesting recruits to pointing are the ex-French trained Epi Sacre who has won 5 races in his native country and Sir Sholokhov who has won two chases for Harry Whittington when owned by Isaac Souede and Simon Munir. If Porlock Bay runs he could be too good for his rivals.

The Ladies Open contains two entries from Alan Hill’s stable namely Back Bar and the enigmatic Hawkhurst. His choice of runner looks likely to start as favourite but Master Dancer a winner for Lauren Reed at Larkhill when dead heating with Southfield Theatre may prove to be the main threat. Tom Barton won a Ladies at Larkhill but was then fourth behind Master Dancer. Oistrakh Le Noir won a competitive Conditions race at Ffos Las but disappointed at Chaddesley Corbett. Hawkhurst has to be produced at the last moment but Izzie Marshall knows him well and he is the selection if Back Bar does not run.

The Oriental Club Owner Trainer Conditions race has attracted 16 entries and the consistent Waterloo Boy might be the answer in an open looking race. The winner of five point to point races to date he is a model of consistency and should run well on his seasonal debut. Country Legend is a tough mare and if she is ready for her seasonal debut, she is likely to be in the shake -up. Both Blairs Cove and Crown of Thorns bring winning form from last season and it will be good to see the colours of the late Jason Warner in evidence if Blairs Cove runs. Milanisi Boy did not enjoy the heavy going at Buckfastleigh and may prefer the better ground at Milborne.
The Countryside Alliance and PPORA Club Members race for 8-year-olds and upwards has attracted a good entry of 22 horses. This is the race where Molineaux holds a second entry and a repeat of his run at Buckfastleigh may be good enough. Voie Dans Voie won an Intermediate at Wadebridge when ridden by Will Biddick and is on the upgrade. Beau du Brizais is another possible ride for Will who aims to follow up on his victory at Barbury Castle. Hadmeathello won well on his seasonal debut last season for Chloe Emsley. Fishy Story also holds an entry in this race and if declared she must come into the reckoning. Blackwater Bramble ran well on his seasonal debut and another to consider is Ahead of the Game the winner of two races last season for the late Jason Warner.

The Hunt race which is open to horses from both of the South Dorset and the Wilton has received an entry of 10 horses. Mary Tory has a good record in this race and Imogens Thunder is sure to have come on for his race at Larkhill in December. Dawn Sunrise was third in a Mixed Open at Larkhill and brings the best current form to the race. Elusive Intentions won a Maiden at Upcott Cross last season and this race has been the plan by his trainer Charlotte Brown. Both Schiap Hill and Shanoule Wood from Hannah Clarke’s yard have been placed this season and have each way chances as does Annabelle Bacon’s Tomb Storme a winner at Chaddesley Corbett in May.
The meeting is completed by two Maiden races. The short Maiden over 2 and a half miles has an entry of 20 and with a safety factor of 14 this could be divided on the day. Spanish Jump owned by Luke Harvey was second on his point-to-point debut at Charing and this ex Jonjo O’Neill hurdler could go one better. Monty Searle was second at Badbury in November but pulled up at Larkhill subsequently but this better ground may suit him. Both Whatwillmothersay and Whitsand Bay have place form in Bumpers this season and if taking to the fences they may be involved in the finish. Charlie and Fran Poste have entered two beginners namely Party Town and Top Wood Bareliere and they should be noted in the paddock. The ex-French trained Nowo and the ex-Irish trained Clondaw Precedent add interest to the race which will probably produce a number of winners throughout the season.

The older Maiden race has 22 entries and a repeat of his run at Barbury by Right Hand of God would be good enough but he made no show in his subsequent run at Larkhill. Oscara finished a remote third on his seasonal debut at Larkhill and is entitled to have come on for that race. Festin d’Un Soir was unlucky at Knightwick but did not enjoy the testing ground at Buckfastleigh. Kilpin has been placed under Rules for Nigel Twiston- Davies and could make the frame as well as Tristan de Gane who should improve on his seasonal debut at Buckfastleigh. Jimmy Tew who has been placed twice already this season may find one too good again. Rufio a placed Hurdler for Harry Fry is now in the capable hands of Peter Mason and is an each way choice.

Milborne St Andrew racecourse is to be found off A354 between Dorchester and Blandford Postcode DT11 0JX .First race 12.15pm. Cost of entry is £12.50 per person online at Southdorsetraces.co.uk or Weatherbys or £15 per person on the day.