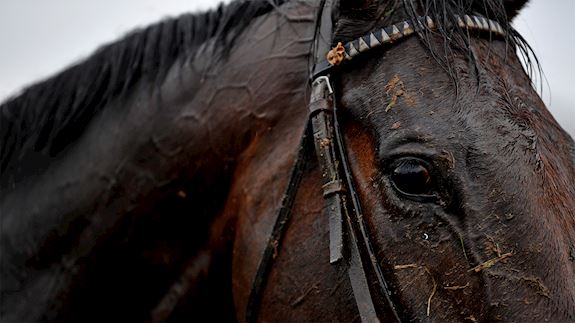 Storm Eunice did her best to disrupt the running of the Countryside Alliance (Wessex) point to point at Badbury Rings but thanks to a sterling effort by Clerk of the Course Martyn Tory, his team of volunteers and the concerted work of the tentage company the meeting was able to go ahead in windy but dry conditions. Riders described the going as on the soft side of good but many compliments were paid for the state of the going bearing in mind the amount of rain that had fallen elsewhere in the country leaving this meeting as the sole survivor of the planned fixtures for the day. There were impressive wins for Rose of Arcadia and Twig and the veteran Caid du Berlais in the three feature races and a local success for Rio Quinto trained by her owner near Dorchester.

The Wessex National Men’s Open race sponsored by Countryside Alliance Insurance Services looked a strong race on paper with the consistent Singapore Saga made a short price favourite. Chameron made a bad mistake at the ditch which rider Ben Sutton did remarkably well to survive but this ruined his chance. Colin Tizzard introduced another newcomer to pointing with the mare Rose of Arcadia for his grandson Freddie Gingell to ride and the mare showed a real turn of foot to draw clear from two out to give Freddie his fifth career victory. The winner of an Irish point to point she was an expensive purchase for the Cheveley Park Stud and although she did win a Bumper and a Novice Hurdle at Wincanton she did not reach the heights hoped for her but this drop in class to points may be the making of her with her rider recording such an impressive start to his career. Bought by her trainer for Freddie to ride the mare looks one to follow this season.

Caid du Berlais rolled back the years to record his first point to point victory since January 2020 in the Greenhaven Landscapes Ladies Open race when ridden by Natalie Parker. Unbeaten in all his point to point races and the winner of two Punchestown Champion Hunter Chases when previously partnered by Will Biddick the thirteen year old gelding held off the attentions of Danseur du Large and Galop du Bosc to record a near two lengths victory. Natalie revealed that the success came with ‘ a sigh of relief’ as she had put herself under pressure to do the best for the gelding which she had previously had a lot to do with when at the peak of his form. Sadly none of his owners were present to witness his return to winning ways but trainer Sam Loxton confirmed that the gelding would probably remain in Ladies races this season.

Although the Milton Abbey School sponsored Novice Riders race attracted the smallest field of the day with five runners four of these were in contention as they approached the fourth last fence. Coco Live and Virak started to struggle and as they neared the second last Twig ridden by Beau Morgan soon put daylight between himself and his nearest pursuer Molineux ridden by Freddie Gingell and he had twenty lengths in hand at the winning post. The winner of a similar race at Badbury in November he found the softer going at Barbury Castle in December not in his favour but on this better going he is a very progressive seven year old and the apple of his trainer Matt Hampton’s eye. Beau has formed a good partnership with him and this was their fourth success together, Describing his ride as ‘ like a Ferrari’ he is looking forward to more wins and hopes that he can run in Hunter Chases later this season.

Bryanston School sponsored the two divisions of the Conditions race with Dr Rhythm beating Highway One O One by just over a length in the First Division for owner Tina Dunsford and trainer Keith Cumings. The gelding likes the top of the ground and this was preferable to the going he had found at Chipley Park. Last season he had given his rider Josh Newman a horrible fall at Bratton Down which finished Josh’s season so this was an appropriate winner for Josh.

The second division proved to be one of the closest finishes of the day with Rio Quinto ridden by George Hiscock holding off the late challenge of The Big Sting ridden by Will Biddick. Looking in total command approaching the last the winner’s stride started to shorten and hanging left handed he held on by a diminishing neck at the line. Bought by owner Tacky MacGregor through the involvement of bloodstock agent Ryan Mahon from Olly Murphy’s stable he is trained at home near Dorchester alongside Dawn Sunrise who won at Milborne last month.

The Knights PLC Restricted race was a competitive event with Feu Des Malberaux making most of the running under Darren Edwards. However His Own Star ridden by Darren Andrews made steady progress and recorded a victory by one and a half lengths at the line. Trained by Stuart Sampson for long standing family friend and neighbour Ron Alford Stuart advised that Ron comes into the yard at 5.30 in the morning to help out and is a valuable member of his team. The gelding who had raced in France was following up his win at Buckfastleigh and continues to progress and should be followed.

The Maiden race was divided on the day due to the number of declarations received. Division One looked like it was going to provide Tamika Leigh with her first ever winner when riding Furioso Des Bordes for Jeremy and Sarah Barber. Jumping the last in front she was caught by the fast finishing Cuzzicombe ridden by Chloe Emsley for Ed Walker. Bought by John Pearn from Keith Cumings stable at the end of last season John explained that he had noted the gelding’s run when he was acting as the Chairman of the Stewards at Bratton Down and thought it looked promising. When he heard the gelding was for sale he encouraged friend John Dorse to join him in a partnership and this has worked out well. Named after a post on Exmoor where there is a plaque to commemorate the Queen’s Diamond Jubilee in 2012.

Stuart Sampson had hopes of a double on the day when Nowo went to the front in the second Division ridden by Darren Andrews. This ex- French gelding looked likely to score until collared close home by Victory Club ridden by Alex Chadwick. Trained in Warwickshire by Harriet Dickin the gelding had been bought by her parents at Doncaster as a three year old and her father Robin advised that he had named the gelding after being booked into the London Victory Club on a stay in the capital. Being by the stallion Soldier of Fortune the chosen name seemed entirely appropriate. Alex who is based in Newmarket was paying his first ever visit to Badbury but reminisced about his initial point to point days with Polly Gundry some 5 years ago when he rode his first ever winner aboard Ned The Post at Woodford.