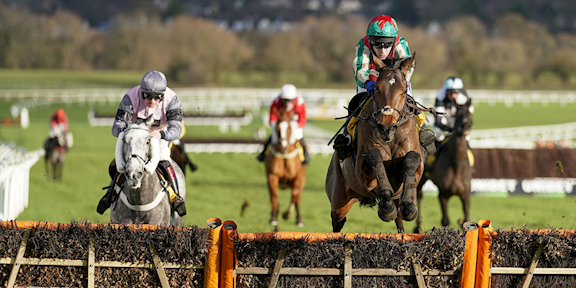 David Pipe believes Adagio is in a “good place” ahead of his attempt to enhance his position as stable flagbearer on his eagerly-awaited return to action in the Wincanton Matchbook Betting Exchange Kingwell Hurdle (2m) at Wincanton on Saturday (19th February).

The talented five year old will bid to move a significant step closer to an outing at Cheltenham next month in the Unibet Champion Hurdle at The Festival™ by making his return from injury a triumphant one in the Grade Two feature at the Somerset track.

After finding only West Cork too strong under top-weight in the Grade Three Unibet Greatwood Handicap Hurdle at Cheltenham in November, the Wiener Walzer gelding was forced to miss an outing at the track in December in the Grade Two Unibet International Hurdle after meeting with a setback.

With Adagio now back firing on all cylinders Pipe, who claimed the Kingwell Hurdle in Ashkazar with 2009, hopes he can now provide himself and his team with a timely boost in what has so far proven to be a difficult and frustrating campaign.

Pipe said: “Adagio pulled a muscle but he is back on form now and Tom (Scudamore) schooled him last week. This is a stepping stone towards the Champion Hurdle and he will improve for it.

“It is the first time he has raced right-handed for us, He won his claimer in France going right-handed and I don’t think he will have any problems with it.

“He ran very well in the Greatwood as it came off a rushed preparation, as he had to have a wind op. He needs to step up from that for a Champion Hurdle. However, he seems in a good place.

“We were hoping to go to the International as it was the perfect race but these things happen with horses and hopefully he can run a big race on Saturday.

“It hasn’t been the greatest season and we’ve been unlucky a few times. Hopefully, that will all change on Saturday.”

Although Adagio, who was picked up for 25,555 euros out of a Clairefontaine claimer in 2020, has proven to be a consummate professional on the track since joining Pipe the early signs following his arrival from France were less than encouraging.

Pipe said: “When he arrived Gemma, my secretary, and me had to reverse him off the lorry as he wouldn’t get off it.

“He was a colt at the time and we thought ‘Oh my God what have we got here’. He used to go out to the paddock for some grass and we even had to reverse him out on to the grass. We gelded him and that helped him.

“He did a lot in a very short space of time. He arrived on August 17th and we gelded him on the August 25th and he then ran at Warwick in November.

“At Cheltenham as there was no one there last year, we trainers had to talk to each other and Alan King said I never forget our one (Duke Of Condicote) getting beat that day at Warwick.

“He said he thought his was a certainty at Warwick, but he said now I know why he got beat after Adagio finished second in Triumph Hurdle.”

It was originally thought that Adagio would develop into a contender for last year’s Boodles Juvenile Handicap Hurdle at The Festival. However, Pipe soon realised he would have to change his plans given the flying start he made for the yard.

He said: “He had gone well at home and we thought he would run well at Warwick. We thought he probably was a Fred Winter horse and it wasn’t until he won at Chepstow that the Fred Winter went out of the window and he had to go for the Triumph.

“For me, he proved he warranted going for the Triumph that day. He had a bit of colic before the Triumph and we weren’t sure we were going to get there but he ran a cracker.

Pipe will also be chasing big-race glory at Haydock Park on Saturday with both Sidi Ismael and Anglers Crag.

Sidi Ismael will attempt to bounce back from falling at Catterick last time out and make it four wins from five starts for Pipe in the Grade Three William Hill Grand National Trial Handicap Chase (3m 4½f).

Pipe said: “Sidi Ismael has done really well and the owners (The Show Is Over Syndicate) have had a great craic with him. We’ve placed him very well and he has picked up some nice prize money.

“It is a big step up in class but as it stands with Bristol De Mai in there he would have no weight so he will take his chance.

“It will be a case of whether he is classy enough. If he isn’t we will find another slightly smaller race. He seems fine after that fall at Catterick.”

Having made a winning debut for Pipe at Leicester last time out, Anglers Crag will have his credentials tested at Grade Two level in the Albert Bartlett Prestige Novices’ Hurdle (3m ½f).

Pipe said: “We will hopefully have Anglers Crag up there as well and he will go in the Albert Bartlett trial. It was a good performance at Leicester and he will have come on for that.

“We are stepping him up to three miles so it will be interesting to see how he gets on. He came over from Ireland and he had some good bumper form over there where he was third behind Sir Gerhard.

“He had to have wind operation so we have been playing catch up a bit. He is entered at Cheltenham in both the Ballymore and Albert Bartlett but he would have to probably win on Saturday to warrant going there for one of those races.”