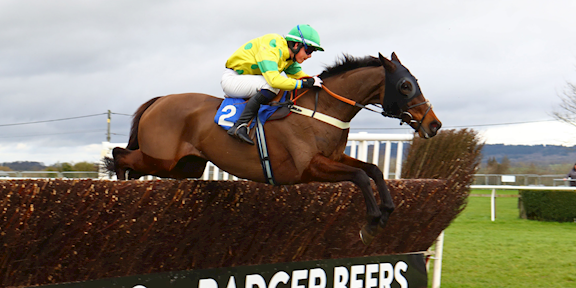 Amateur jockey Freddie Gingell described riding his first ever winner under Rules just a month after turning 16 as “amazing”, before paying tribute to his mum who died of cancer in May 2020.

Schoolboy Gingell, who will sit his GCSE exams this year, said he was thrilled to achieve his dream of riding a winner at his local track, Wincanton, after partnering West Approach to glory in today’s Colin Lewis Memorial Open Hunters’ Chase.

The youngster, who is based in nearby Mere, received an emotional reception from friends and family when returning to the winner’s enclosure at the Somerset track. It was also a first victory for the 12 year old Westerner gelding since landing a Grade Three contest at Cheltenham in 2019.

Faced with just one rival, West Approach put in some mighty leaps in the hands of Gingell. The 6-4 chance, who is trained by Gingell’s grandfather Colin Tizzard, bounded clear in the home straight to score by 21 lengths over the odds-on favourite Alcala.

Gingell said: “It was amazing. This horse jumps for fun and when I’m schooling him at home he is always jumping off. He is amazing and I knew I had a good horse underneath me.

“I’ve got racing blood in me so this is what I should be doing hopefully. It is amazing being in the weighing room but we have a few of the boys in schooling on a Wednesday so I know most of them which is even better.

“My confidence did start growing turning in but I still had three tough fences to get over. I couldn’t believe it really (when I saw the winning post looming). It is only my fourth ride and I’m still a novice rider. It is amazing to have a winner under Rules.

“It does mean more to ride that first winner here as I can’t say I ever miss a meeting at Wincanton. If I go to school, I’m always here for the last race.”

Gingell, who lost his mum Kim to cancer aged 43 nearly two years ago, said he believes he had an extra pair of eyes watching his every move.

He explained: “Mum is probably up there crying now wishing all the best to me. It is a shame that she can’t be here to see it but that is life. She wanted me to do my best.

“I want to stay amateur this season and see where that takes me. I leave school in May and hopefully concentrate more on my racing then.

“It would be nice to get my conditional licence next season but I’m only 16 and in no rush.”

Among the first to congratulate Gingell in the winner’s enclosure was his grandfather, Cheltenham Gold Cup-winning trainer Colin Tizzard, who described the race as “beautiful” to watch.

He said: “My heart is still beating now as for the last circuit the horse was absolutely loving it and Fred was loving it and that goes through the reins.

“I’ve never seen this horse jump like that. I know it was only a two horse race but it was beautiful to watch. It was lovely for Fred. He wants to be a jockey and he is advertising himself now.

“We will never forget Kim but things have moved on. If she is watching now she will have loved every second of it.

“Today is to be enjoyed for the fact that a young rider that has got no nerve in his body and he can see a stride and a horse sees a stride and off they go. It was absolutely fantastic.

“Of course he is going to have a good chance (of being a jockey) because of where he is.”

Not only was Gingell’s famous grandfather on hand to witness his first success under Rules but so was his uncle and assistant trainer, Joe Tizzard.

He said: “I was chuffed to bits with him. It was a lovely ride. The horse enjoyed him on his back as he tanked all the way through the race.

“It is a big thing for Fred to come to his local track with half the family here. There was pressure on him but it didn’t seem to both him too much.

“It is lovely for him to get his first winner here but there is more pressure instead of sneaking off somewhere quiet where you don’t know anybody.

“It is lovely for everybody. He has got both sets of grandparents here, as Dave’s (Freddie’s father) mum and dad Graham and Sylvia are here as well, which was nice.”

Having tasted victory in the saddle at the highest level on numerous occasions Joe Tizzard believes that Gingell, who is currently studying his GSCE exams at Sexey’s School in Bruton, has what it takes to succeed as a jockey.

He added: “He does ride well for a little squirt and he is good over a fence. He is really brave but he has done loads of schooling.

“If he wants it he has got a good opportunity to be a jockey and I think he is good enough. He has got a big future I think and that is not me being biased.”

Although Gingell kept a calm head his father Dave Gingell admitted that there was a “tear in his eye” after watching his son secure the victory he had long been dreaming of.

He said: “That was good. I wasn’t too nervous. I watched it all and it was perfect. He had his instructions from Colin and he did what he was told. We only live four or five miles up the road so that was really good.

“It was brilliant, words can’t explain it. There is a tear in the eye. He has been chucked in at the deep end a bit but he is responding alright. He has had four rides now and hasn’t been out of the winner’s enclosure.

“I was nervous at the start but that was the same with the pony racing really. But as soon as the starter lets them go I’m alright. He has done it all a million times on a horse at home but to do it on the track is good.

“He knows where he wants to go in life. He loves his farming and when he finishes this he will come back farming but if he can earn a few quid in the meanwhile he will go and do it.”