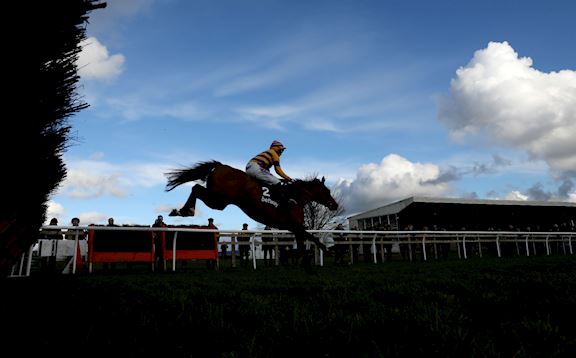 After running out an impressive winner of the Somerset National Handicap Chase at the track 14 days ago the eight year old gelding will attempt to make it two wins from as many visits to the course in the 3m 1f feature on the eight race card.

Following his latest success El Paso Wood was hit with a 10lb hike in the weights by the handicapper. However, Wellington-based Pipe remains optimistic he can remain competitive with conditions set to suit.

The trainer said of the Judith Wilson-owned gelding: “El Paso Wood won well at Wincanton last time in the Somerset National and although I do think the race fell apart a little bit the handicapper couldn’t do much else but put him up like he did as he won by so far.

“This looks a tougher race but he handled the track well last time and the better ground will help him.

“Since having a breathing operation in October he has progressed with each run since being in this country.

“We were hoping he would run well last time but he did a lot better than expected. Philip Armson gave him a good ride last time and takes a valuable seven pounds off again.

“We thought we would put him in as there were not many entries in the race but we will know the true value of his last win after this race.”

El Paso Wood is one of four runners on the card for Pipe, who also appears to hold strong claims in division one of the Peckmoor Farm Lodges Novices’ Hurdle with recent Huntingdon runner-up Thanksforthehelp.

He added: “Thanksforthehelp has progressed with each run. He is a big backward baby at the moment but he has got good breeding.

“He has got plenty of ability and hopefully he will end up making a nice chaser in time.”

Those looking for a potential star of the future in the concluding bet at racingtv.com Mares’ Open National Hunt Flat will be drawn to the Nicky Henderson trained newcomer Fishcake, who is a half-sister to dual Cheltenham Festival winner Monkfish.

David Greenway, spokesman for owners FB Racing Club, said: “Fishcake has taken a while to get to the track as we were hoping to have had a run into her by now.

“We do like her but we don’t know how good she is. She has got a great pedigree and she will make a good broodmare but the idea is to run her and hopefully make her a winner first.

“She has done some really nice pieces of work at Seven Barrows but until they get to the track you never know how good they are.

“She has shown us enough to suggest she can have a career as a racehorse as well as a broodmare. This is only a starting point and we will be happy if she runs into the money.”

Despite Fishcake being closely related to Monkfish, winner of the 2020 Albert Bartlett Novices’ Hurdle at The Festival and last year’s Brown Advisory Novices’ Chase at ‘Jump racing’s ‘Olympics’, Greenaway admits the pair have few similarities.

Greenway added: “Monkfish is quite a raw individual whereas Fishcake would be 16 hands at a push so they are not like each other in size. She doesn’t have too many characteristics of Monkfish with the exception they are both chestnut coloured.

“We brought her for 25,000 euros and I don’t think we would pick her up for that price now. It was her pedigree that drew us to her but as a specimen she was decent enough.

“She is a nice moving little filly and is a sweet little thing. It would be lovely if we could get a couple of wins to her name.”

As for how Fishcake was given her name Greenway admits it was all down to an interview the Seven Barrows trainer carried out with now retired Grand National-winning jockey Mick Fitzgerald on racing channel Sky Sports Racing last year.

He added: “We named her after the interview Nicky did with Mick Fitzgerald on At The Races where he couldn’t remember what Monkfish was called.

“He called him ‘Fishcake’ and ‘Fishpond’ but we plumped for ‘Fishcake’. It was all a bit tongue in cheek.

“We decided to send her to Nicky though as we thought we would go to the best man in this country at training fillies.”